Six Nations bolters: Six up and coming players to watch 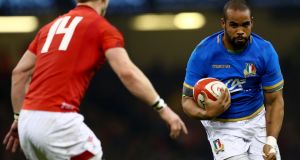 Maxime Mbanda: ideally suited to the role of flanker and makes an impact in all aspects of that role. Photograph: James Crombie/Inpho

Maxime Mbanda (Italy): Since making his debut against the USA in San Jose in 2016, the Rome-born flanker-cum number eight has accumulated 15 Test appearances for Italy. It would have been more had he not suffered a serious knee injury in last season’s Six Nations Championship that kept him sidelined until November.

He graduated through Italy’s underage teams, winning five caps for Emerging Italy before making his senior debut. He is currently under the coaching tutelage of former Ireland scrumhalf Michael Bradley at Zebre. A brilliant athlete, he is ideally suited to the role of flanker and makes an impact in all aspects of that role.

The son of a Congolese father and Italian mother, the 26-year-old has a strong social conscience away from the rugby pitch, presenting his debut jersey to the Le Tre Rose club in Piedmont, amongst whose players are immigrants from 14 African countries, Romania and Albania.

Antoine Dupont (France): The 22-year-old Toulouse scrumhalf came through to the senior French team with an impressive pedigree from the age-grade international set-up before winning his first cap as a replacement against Italy in the 2017 Six Nations Championship. In eight of the 10 caps that he has won, he’s come on as a replacement but that might change given his club form.

He has been an integral part of Toulouse’s superb showing in both the French Top 14 and in qualifying for the quarter-finals of the Champions Cup and formed decent halfback partnerships with both Zack Holmes and Thomas Ramos. Strong and quick, he possesses excellent vision and can also place-kick in the true tradition of French nines.

The fact that he can instantly pick up the pace and tempo makes him a valuable impact sub but based on current form he deserves a chance to run the game from the start.

Joe Cokanasiga (England): The 6ft 4in, 18½ stone Bath wing is not an unfamiliar physical specimen in the modern game but, allied to that size, he possesses pace and decent footwork, making him a real handful for defenders. It’s hardly a surprise he modelled his game on his favourite player, the late Jonah Lomu.

The 21-year-old is Fijian born, moving to England when he was three years old while also spending some of his childhood in Brunei and Germany because of his father’s various army postings. In 2015 he joined the London Irish academy, in 2016 signed a senior contract, making 22 appearances before moving to Bath in the summer.

A former England underage international at Under-18 and Under-20, he made his senior England debut against Japan in November and retained his place for the win over Australia, scoring a try in each match. Quick and powerful, he is a potential game changer.

John Cooney (Ireland): In the light of injuries to Kieran Marmion and Luke McGrath, the 28-year-old scrumhalf will be given an opportunity to understudy Conor Murray in the Ireland squad at the start of the Six Nations Championship. It represents a great opportunity for the in-form, Dublin-born Ulster player and he’ll be keen to underline his credentials.

He played for Ireland at Schools, Under-20 and Emerging Ireland levels before winning his first senior cap on a summer tour to Japan in 2017. His second and third appearances were off the bench against Australia in the summer and then Ireland’s game against Italy in Chicago.

He made his first start for his country against the USA in November and has never been on a losing Ireland team.

He’s quick, strong, an intelligent reader of the game when it comes to spotting gaps on the fringes and in his running lines in support of teammates. He’s also an accomplished place-kicker. Murray tends to see out games so it’ll be interesting to see how many match minutes he can accumulate from the bench.

Thomas Young (Wales): The 26-year-old son of Wasps coach, Dai, under whom he plays at the London club, will be a strong contender for the number seven jersey, battling Justin Tipuric and Josh Naividi for the honour. A product initially of the Cardiff Blues academy, he was released and joined Gloucester on a short-term contract before linking up with his father at Wasps in 2014.

He initially understudied Wallaby great George Smith but has made the number seven jersey his own over the past couple of seasons. He played at every underage level for Wales before making his debut on a 2017 summer tour and winning a brace of caps against Tonga and Samoa.

He’s a prominent presence at the breakdown, reflected in leading his club side in turnovers won there, but he also possesses speed and good hands. Wasps’ expansive style suits his game perfectly. If Warren Gatland is looking for a genuine seven then Young could get his chance in the Six Nations.

Stuart McInally (Scotland): The 28-year-old started his rugby life as a flanker making his Edinburgh debut back in 2010, but once a decision was made to switch to hooker he spent a season on loan with Bristol learning his new craft. At 6ft 3in, he is tall for a hooker but it hasn’t stilted his progress and the qualities that he brings in open play from his former calling as a flanker add considerable value.

However he is judged first and foremost on the basic duties of the hooker role – he made his debut for Edinburgh in the number two jersey in 2015 – his lineout throwing at club level and the understanding he has developed with Ben Toolis has been particularly impressive and their relationship has been particularly productive.

He has won 20 caps for Scotland at this point and could be a pivotal figure in their Six Nations campaign both in terms of set piece and around the pitch.