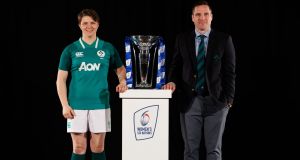 Ireland are looking to build on a 2018 campaign which saw them finish third after winning two and losing three of their five fixtures - including a 33-11 defeat to England in Coventry on the tournament’s closing weekend.

Ciara Griffin will captain Ireland from number eight, with Juliet Short and Claire Molloy alongside her in the backrow.

Aoife McDermott and Nichola Fryday are named in the engineroom with props Laura Feely and Fiona Reidy either side of Leah Lyons in the frontrow.

Nicole Fowley takes the number 10 jersey and she is joined in the halfbacks by Ailsa Hughes. Sene Naoupu and Michelle Claffey line up in midfield with Lauren Delaney at fullback and Eimear Considine and Megan Williams on the wings.

Linda Djougang, Anne Marie O’Hora and Kathryn Dane could all make their international debuts off the bench.

Ahead of Friday’s tournament opener, Griggs said: “There’s no bigger challenge than to open the Six Nations against England, they are second in the world for a reason and are a very good side who challenge you in every part of the game.

“We had a good Test against them in November and while we didn’t get the result, we showed some of the standards and improvements that are required to compete at this level which was a huge positive for us.

“We have had good preparations leading into this Friday and are looking for a strong performance to get the championship started in front of what we hope will be an amazing crowd behind us.”

Tickets for Ireland’s home games are available via ticketmaster.ie

1 Tour de France: Every yellow jersey winner must feel guilty by some association
2 Kevin Babington: Learning to live again after life changed forever on Long Island
3 Clifford brothers to the fore as East Kerry retain title
4 Matt Williams: The sky is not falling in on Irish rugby - but Ireland do need a new plan
5 Juan Imhoff and Racing 92 leave it late to end Saracens’ reign
Real news has value SUBSCRIBE