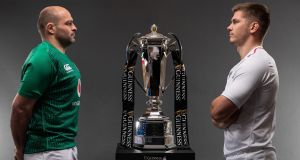 Ireland’s Rory Best and Owen Farrell of England. The teams will face each other in the opening of the Six Nations at the Aviva Stadium in Dublin on Saturday. Photograph: Billy Stickland/Inpho

Relegation from the Six Nations has been dismissed as “absolutely not on the agenda” by tournament organisers despite ongoing talks over the significant remodelling of the international game.

Chief executives of the leading unions met in Los Angeles this week to discuss the creation of a new world league, made up of the leading 12 teams, with World Rugby believed to be pushing for promotion to and relegation from the Six Nations.

Italy go into this year’s championship on a run of 17 consecutive Six Nations defeats and have slipped to 15th in the world rankings, while Georgia (13th) have repeatedly stated their desire to be allowed entry into what they perceive is a “rich old-boys’ club”. The World Rugby vice-president, Agustín Pichot, said last November he would “love to” see Georgia in the Six Nations in the next five to 10 years.

However, Ben Morel, the Six Nations chief executive who was appointed in August, echoed his predecessor John Feehan and was adamant major changes are not in the pipeline. “Any relegation is absolutely not on the agenda,” he said. “We are working hand-in-hand with our six constituents.

“The values of the Six Nations and what it stands for is what defines us. We have to be extremely cautious when looking at any of these elements. That said, it is in the interest of more rugby territories developing and so any relegation matter can only be looked at when there is something of value to be relegated to. So let’s focus more on upgrading something that’s not sustainable.”