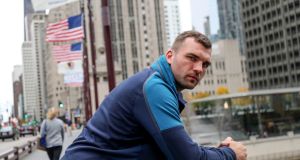 Tadhg Beirne: “It doesn’t matter who it is against or what the occasion is, it’s a start in a green jersey. It’s a big moment for me.” Photograph: Dan Sheridan/Inpho

There was never much doubt that Tadhg Beirne was making the correct career move when the former Leinster lock returned to these shores and opted to play for Munster.

And certainly there are none now, not after his two summer cameos off the bench in Australia have been augmented by Joe Schmidt’s decision to give him his full Test debut tomorrow.

“This is probably the main reason I came back to Ireland. To be given the opportunity in the first game since I have come back is huge for me. All I can say is that I am really looking forward to it. My mum and my dad and my girlfriend are all coming over and then we have family friends that are in Philadelphia who are flying in for the game as well.”

Beirne has been taking some ribbing from team-mates after missing a halfcourt shot at the Chicago Bulls basketball game on Wednesday night, but embarrassment aside, said of the experience: “It was class. Really cool.

“Look, I ended up getting to go on the Chicago Bulls court and have a shot so I can’t complain. I got to see them courtside warm-up and all that so it was a pretty cool experience and luckily for us it was a really tight game and went into overtime. It’s just some spectacle, the whole thing, the entertainment between time outs and everything, it’s a different experience.”

But although this fixture has been partially portrayed as a contrived means of chasing the almighty US buck, try telling that to those taking part. This could be a significant staging post on the road to next year’s World Cup in Japan for a few of these players, and thus in their careers.

“It’s my first start. These opportunities don’t come around too often. It doesn’t matter who it is against or what the occasion is, it’s a start in a green jersey. It’s a big moment for me. I just have to do what I am asked to do and hopefully I can put in a good performance.”

Beirne, along with Joey Carbery and Andrew Conway, is one of three former Leinster players now with Munster who will feature in tomorrow’s starting line-up, and no less than Carbery, Beirne has already established himself in his new environs, starting six games to date.

“I haven’t had as many wins as I would have liked thus far but I think that will come. I think we’re starting to find our feet there. I am finding my feet there a lot better. My performances at the start weren’t where I would have liked them to be. They are slowly improving and thankfully I did enough to get into camp.”

Asked where he felt his performances had initially come up short, Beirne said: “It was just more about the system and everything like that. I was finding it kind of difficult to get into games the way I probably used to. It was just taking more time and I was probably getting frustrated with myself about not contributing what I usually would have contributed to.

“But look, I feel like my performances have been improving more and more. I’m getting to know the players around me and what they are good at and everything like that. The better you know your team-mates, the better you play, for sure.

“I think my performances have definitely been going up and hopefully they keep going that way,” added Beirne, who believes his displays in the Heineken Champions Cup games against Exeter and Gloucester marked a significant upturn in his own displays.

Johann van Graan recently revealed that Beirne’s ability to win turnovers at the breakdown has led to him being given something of a free role.

“I do have a bit of a license to go after rucks a little bit more and that is just something that is given me but for me it is all about picking my opportunities, and knowing when it is a good decision to come out of that system. I still have to be smart within that system.”

Nor will that apply with Ireland.

“Test level is completely different particularly in terms of how quick the game is and I don’t think I will have that kind of license, mainly because you can’t come out of the system, because if you do the opposition will just pick you off. But if the opportunity comes up in front of me, and I feel I can go and poach, I will. It is all about being smart and knowing when to go for it.”