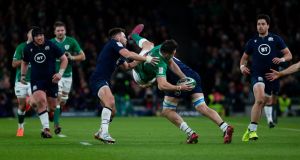 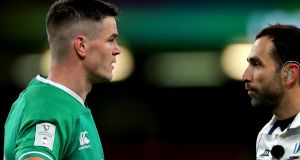 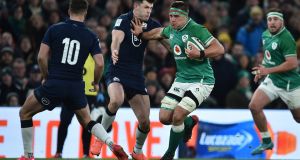 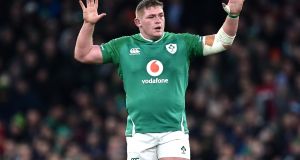 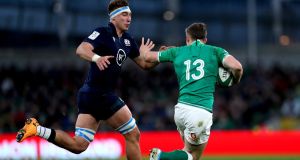 The backfield freedom suits him. As does a new licence to attack with 19 runs for 138 metres. Danced into space before taking on and beating Stuart Hogg but referee Mathieu Raynal missed a blatant tip-tackle after he chipped the defence. Rating: 7

Finally, established in the team. Living mostly off scraps, which he turned into 45 metres from five carries, his work rate earned the last penalty when bumped off the ball by Sam Johnson. Rating: 6

The value of an Ireland offence revolving around their main man; put Conway clear with clever use of the touchline and an offload, had Aki storming down field and held his line for the return pass. Standout performer until injured before half-time. Rating: 7

Sharp. Allayed concerns about his defence by putting that big frame to use and sprinkled some star dust on the occasion when gathering Sexton’s 22-metre drop-out for a trademark gallop. Rating: 6

Kept calm despite failing to convince Raynal that three incorrect calls should have resulted in Irish possession. No matter, finished off the first try and following one of those rare brain freezes, when stalling over a miscued 38th-minute penalty, his right boot kept Ireland in front. Rating: 7

Authoritative box kicks gained early territory and while almost to blame for a 14-point swing, when intercepted by Johnson, Stander saved the day with a turnover. John Cooney didn’t do enough in 30 minutes to budge him. Rating: 6

Lovely quick hands created Sexton’s try. Powerful, unflinching and dynamic even after returning for a concussed Dave Kilcoyne. Proved, once again, that he is Ireland’s primary loosehead. Rating: 7

Delivered a reliable lineout. “Can you do a squat?” the medic asked after a 46th-minute quad injury. “Now jump”. The Cape Town native passed both tests to keep Rónan Kelleher at bay for now. Rating: 6

Helped off after facing 77 minutes of horrendous attrition that included a stunning 13 tackles and 10 carries. Double rumble on 54 minutes, the first requiring three Scots to stop him, the second a beautiful side step, cleared the way for Sexton to make it 16-9. Remains the linchpin of this Irish pack but he looked badly hurt. Rating: 8

Immense until making way for Dev Toner, playing like the leader he needed to become with a storming performance either side of the ball, a lineout steal and dozens of dominant contributions around the ruck. Rating: 8

Leinster schoolboy rugby has produced three phenomenal Ireland forwards in the past four years. A national pack including Ryan – 17 tackles, 14 carries here – Dan Leavy and Doris would be a sight to behold. Some day. Rating: 8

The numbers – 18 tackles, 14 carries – tell the story of Stander’s continued value to this team and while harshly penalised on 64 minutes, which allowed Adam Hasting to make it a four-point game, the late turnover secured this victory. Rating: 8

Defensively excellent with 15 tackles, with five misses not telling the story of this openside’s bravery. Cramped up on the hour but the seven-point deficit and a lack of alternatives demanded his recovery. Rating: 7

Four minutes and 17 seconds of an international debut is not enough time to merit a rating but the 21-year-old is in good company as Paul O’Connell lasted 32 minutes of his first cap against Wales in 2002 when knocked out scoring a try. At least Doris also made an impression with a textbook turnover in the Ireland 22. Failed Head Injury Assessment against Treviso last November could factor into ability to recover for Wales in seven days. Rating: Not on long enough to rate

Peter O’Mahony produced one of his more heroic games for Ireland – despite giving up a 28th-minute penalty for obstruction that ruined a scoring opportunity – with typically defiant defence at the end. The rest played their part in the late resistance except Dave Kilcoyne, who was forced off concussed. Rating: 7

Andy Farrell nearly punched a hole in the coaches’ box when Ireland’s defence held out in the most brutal ending imaginable. The pack played in his image and while Scotland’s performance deserves credit this will not be enough to contend for a Six Nations title. Rating:7