Devin Toner: ‘After the World Cup, I didn’t think I would be wearing green again’ 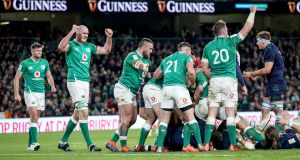 The roar of approbation as the last consonant of Devin Toner’s name escaped over the tannoy at the Aviva Stadium 67 minutes into Ireland’s Six Nations Championship tussle with Scotland produced a mighty din, the 33-year-old Leinster secondrow enveloped in a verbal hug as he stood on the touchline, preparing to enter the fray.

Omitted from the World Cup squad it was the Irish supporters’ first opportunity to show their solidarity with a popular player and they were not going to let the moment lapse. Toner confessed to being oblivious to the warmth of the reception, his mind focused instead on his first port of call, a lineout. It’s his area of expertise and he immediately assumed responsibility.

He chuckled: “I suppose I had to come on when a lineout was happening and I had to throw it to myself, didn’t I? That was what was open though. It was good. I think I heard the cheer more when I caught the lineout (than coming onto the pitch), which was nice.”

After missing out on Japan he explained that he spent a couple of weeks talking things through with his family.

“I spoke to my wife, my mother, my brother, my sister; we are a close family. After about two or three weeks, I realised that I had a job to do back in Leinster, realised that I was the senior guy and I had to prepare for the start of the season. I played a lot of minutes there.”

It was a supportive environment, albeit that it wasn’t long before the commiserations were laced with slagging. His priority was to focus on bringing the right attitude and application to training and matches and let others decide if that merited a recall. Andy Farrell restored Toner to the national squad and on Saturday he won his 68th cap. There were moments when he worried whether he would get back.

“Yeah, obviously after the World Cup, I didn’t think that I would be wearing green again. To be able to get the jersey on again is brilliant for me. I said (to myself) ‘I have put my hand up for selection as much as I can. If am selected, I am selected. If I’m not, I am happy with how I am playing.

“Obviously when it happened, you start doubting yourself and saying, ‘is it me?’ To see the support that the country gave me was really good.”

The Irish squad has been buoyed by the energy and enthusiasm of youth. Toner admitted: It’s refreshing to see all the younger faces, Max Deegan, Ronan (Kelleher), and Caelan (Doris). You look at all the young guys coming through like Will Connors, Bairdo (Ryan Baird), Robert Baloucoune and Harry Byrne, all the development boys. Just seeing their fresh faces was brilliant for the squad.”

There was a slight change in the pre-game regimen, the Irish squad arriving at the ground a little earlier than they would have in the past.

“We would usually go for a walk through in Stephen’s Green but we didn’t do that. We just chilled out all morning. He (Farrell) said he wanted to prepare as we normally would for a game at home.

“We just chilled out all day. He (Farrell) didn’t want us to get too riled up, too quickly. Then we arrived a bit earlier here and we did a walk through out on the pitch, walking through what we’ll do at certain stages. Then we came back in and started getting hyped up then. I’m kind of chilled anyway, watching cooking videos on You Tube all day long,” he smiled.

His 13-minute cameo included eight tackles, including a couple of dominant hits, as Ireland defended their line in a fraught end game.

“I think we dug deep in defence, but again, like you are going to hear from everyone, there is a lot of stuff that we can look at to work on. And we are going to have to. We will obviously get better the more we play together.

“When someone like CJ (Stander) gets a turnover like that at the end, it is nearly as good as a try. You are putting so much into defence and fronting up and putting body on the line. When you see it pays off, it’s brilliant. It’s great to see the lads digging deep and coming away with it in the end.

“There is stuff that I have to look at. I knocked the ball out of Bundee’s hands when he was trying to pick it up (in the Scottish 22) and I gave away the free-kick for that lineout that got them back (into our 22) at the end.”