Scotland left rueing another one that got away despite improved performance 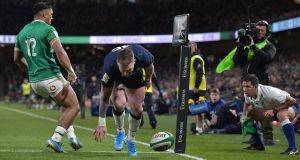 Scotland captain Stuart Hogg drops the ball over the line during the Six Nations game against Ireland at the Aviva stadium. Photograph: Charles McQuillan/Getty Images

It wasn’t pretty, but Ireland are off the mark. The Andy Farrell era has started with a win, after his new charges scrapped their way to a 19-12 victory over Scotland in Dublin on Saturday.

In some respects, the new boss couldn’t have asked for much more, but he will know there is plenty of work to be done if Ireland are to mount a credible Six Nations title challenge.

Gregor Townsend’s Scots arrived in Dublin with a point to prove after a miserable Rugby World Cup, which started with a 27-3 defeat to Ireland.

And they played as though that defeat was still fresh in the memory, refusing to be cowed in the collisions and relishing the physical challenge at the Aviva stadium.

But despite all their huff and puff they didn’t quite have the muscle or the guile to turn a solid performance into a result – and the absence of Finn Russell seemed crucial.

The Racing 92 outhalf is currently suspended for a breach of discipline, after failing to make training two weeks ago following a Sunday night drinking session at the Scottish team hotel.

The tenacity of the visiting pack provided front-foot ball which Russell surely would have relished, but parts of the Scottish press have refused to pin their side’s defeat solely on the missing mercurial outhalf.

Indeed, in The Scotsman, Iain Morrison has instead focused on the steady showing of Adam Hastings, who coped with the burden admirably in the heat of the Aviva.

He writes: “It was a little like Hamlet without the Prince or, given the Scotland fans’ love affair with Finn Russell, Romeo without Juliet. These big matches are decided by fine margins and it was difficult not to wonder what might have unfolded in Dublin had the Racing 92 playmaker been calling the shots.

“Still, sporting history is littered with those who have been handed an opportunity, grabbed it with both hands and never looked back. Adam Hastings’ display didn’t quite hit those heights but the young pretender won’t give up the jersey without a fight. . .

“He is still learning on the job but all the great playmakers share one trait that Hastings has in an abundance: self belief.”

If there were regrets about what might have been after Scotland’s defeat, they stemmed from missed opportunities more than the make-up of Townsend’s side.

And there was one missed opportunity which will rankle more than the others. Early in the second half Scotland were trailing 13-6 when captain Stuart Hogg was played in on the left.

He went to touch down one-handed and spilled the ball – an uncharacteristic error, and one which ultimately cost his side the game.

And for the Scottish press, it’s Hogg’s moment of madness which will live long in the memory. In The Scotsman, Duncan Smith writes: “In a weekend of monumental change upon these islands of ours the question for the Scotland rugby team was: Is it a time to build up or a time to break down?

“The answer, sadly and yet so familiarly, was the latter. New captain Stuart Hogg’s fumble as he dropped the ball over the tryline at a pivotal moment early in the second half, when the game could have been levelled at 13-13, encapsulated the malaise that seems to have an unbreakable hold on Scottish rugby at present.”

Hogg’s mistake is also reflected in Andy Newport’s player ratings, again in The Scotsman. He gives the Scottish captain a six out of 10, after a strong showing which was ultimately tarnished.

He writes: “[Hogg] charged about like a man possessed as he sought to lead by example in his first game as captain – but the Exeter fullback will be haunted by his horror fumble on the try line for years to come.”

And what about Ireland? Their performance was one which perfectly emphasised the side’s current strengths and weaknesses – plenty of heart offset by a lack of guile at key moments.

As Michael Aylwin writes in the Guardian: “A new coach, a new captain but the result was the same as always for Ireland against Scotland on Dublin’s Lansdowne Road.

“Andy Farrell may not remember his first game as Ireland’s head coach with any particular pride, such was the error count. Defiance and hunger, though, remain palpable Irish characteristics and were needed as they withstood a last-ditch assault on their line by Scotland.”

Meanwhile Tom English, writing for the BBC, was far from impressed with the hosts’ showing: “Ireland survived their way to victory. Save for their defence, which was extraordinary, they were a major disappointment,” he writes.

“They came up with a handy play that got them an early try but much of the stuff they put out there was drearily familiar. If their supporters were looking for something more adventurous in the post-Joe Schmidt era then all they got was more Joe. And bad Joe at that.”

And English is another to lament Scotland’s profligacy and failure to turn a performance into something tangible.

“Angst and agony against Ireland. Again. The best chance of ending a 10-year losing run in Dublin gone. A wonderful opportunity to cause a ground-shaking upset and get their Six Nations off to a seismic beginning wasted.

“Same story here two years ago, same story at Murrayfield a year ago. Same old, same old. Tonnes of encouraging things, but not enough to bring the win that Scotland could have and should have delivered.”

Next up for Scotland, it’s the visit of England to Murrayfield. But while they have regrets, hope springs eternal.

In the Scotsman, Morrison writes: “At the final whistle there was no doubt that this was one that got away and it was impossible to avoid the question on the lips of every Scottish fan. . . what on earth are they feeding the players since that Yokohama World Cup disaster?”

The Scots could yet have a big part to play in the Championship.