Johnny Sexton: ‘It hurts more when you are captain’ 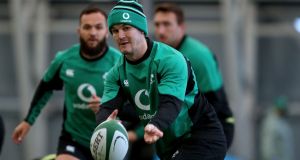 Johnny Sexton: “I think it was a good and bad time for the Six Nations to finish up for me.” Photograph: Dan Sheridan/Inpho

Johnny Sexton resumes his captaincy of Ireland having had way more time than he would have liked to mull over his last experience in the job. Ireland’s 24-12 defeat by England at Twickenham eight months ago was one of the unhappiest of his 91 caps to date for his country, given both his own and the team’s performance.

Sexton’s afternoon began horribly when he couldn’t control a wickedly bouncing grubber by Ben Youngs as he reached for the ball first with his left hand, then right and then left again under pressure from Owen Farrell. George Ford followed up to score as the cameras panned in on Sexton’s pained expression, and the defeat hurt all the more for it being his first in four games as captain of his country.

“Yeah, big time. It hurts more when you are captain because you are the guy who is meant to be leading by example and putting in the performance that shows the way. If you don’t do that, it can be a hard place to have to stand and talk, and to try and lead really.”

While the captaincy has come later in his career than most, Sexton says that’s no excuse not to try to improve. Hence, he also used some of the time off to elicit feedback from team-mates.

“I think it was a good and bad time for the Six Nations to finish up for me. Obviously I had a bad personal performance against England,” he admits with typical candour.

“It was not a good head space to be in for a long time waiting for your next game, but it gave me a good chance to reflect on the leadership stuff and searching for that feedback on what I could do better – what I did well, what I didn’t do so well – and try and improve in that regard.”

“I got some good insights and we worked hard as a leadership group over the time with Zoom calls, with different teams and different people, to try and improve ourselves as a group. The time was brilliant for that. Hopefully we will see the fruition for however long I do it for.”

While acutely conscious of the need to put on a performance “that people at home watching can relate to and know what it means for us to play for Ireland,” Sexton says: “At the same time, you’ve got to win. You can’t go out there and be so eager to throw the ball around to please everybody that we come unstuck a little bit like that England game.”

“We need to do the thing that’s right and if that means kicking, we’ll kick. Ultimately, for us, it’s about winning. That’s the main thing, first and foremost.”

To compound the hiatus, almost a third of the squad has changed since February, but Sexton believes there were signs of Ireland having “more of a shape in attack – I think if you watch the Welsh game would have been very evident.”

“There were bits of it in the Scottish game. Some of you guys felt that it was the same old Ireland but I think that there was more in that than was suggested.”

“But in those first two games I think you saw the blueprint that Andy’s bringing in attack with Mike Catt and Richie (Murphy) as well helping out. We tried to use that shape and then make better decisions in and around having a wider game plan.”

“That wide-wide was pretty evident against Scotland when we had the ball, we didn’t have it too often, and then against Wales people got ball into those wider channels much earlier and really well at times.”

“Obviously against England we didn’t and they did a really good job of shutting us down and putting us under pressure. Now we’ve got to be able to learn from that, to still be able to put our game plan on them, but that involves kicking at the right time and putting the pressure on them when they’re trying to do that to you.”

Since the resumption, Leinster’s Heineken Champions Cup quarter-final loss to Saracens overshadowed an unbeaten retention of their Guinness Pro14 crown.

While he found the two semi-finals and last Saturday’s thrilling final “tough to watch”, there are potential benefits from Leinster’s exit.

It’s also afforded Ireland better preparation for the re-arranged games against Italy at the Aviva Stadium this Saturday (kick-off 3.30pm) and away to France a week later.

“If we had played the final last Saturday or Ulster had played it, for example, the preparation today (Tuesday) would have been day one which would have been very difficult for those players to sort of bed their way in, having the emotions that go with playing a final. Two days later to be preparing for an international would have been tough.”

“So the only silver lining on that loss to Saracens was that extra preparation time for these two massive games. We had a bit of a later start than we anticipated with some of the scares around the tests in some of the provinces, so it was a later start but we’ve used it wisely.”