Kerry to Dublin with the window down: Griffin driven to succeed with Ireland 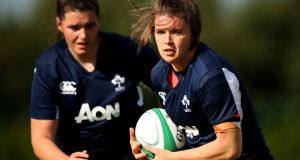 People might not want to hear about athletes having to figure out Covid restrictions, but spare a thought for Ireland captain Ciara Griffin, who made the drive from Ballymacelligott, Co Kerry to the Sports Ireland campus in Abbotstown.

“We have travel pods and in terms of safety we all follow Covid precautions – you know, face masks, windows down – and we have those procedures in place until we get to camp,” said Griffin ahead of the rescheduled Six Nations match against Italy at Donnybrook on Saturday (kick-off 6.30pm). “I have to commend the IRFU for the protocols they have put in place. We have a Covid assessment every morning to check on symptoms, and temperature checks before and after training.”

“It’s chilly enough but plenty of layers and you should be fine,” said Griffin. “It’s part of Government guidelines that you have to have a ventilated area. It is a small price to pay to make sure you know you are safe coming into camp. It is not the worst.”

The Covid drive is far more interesting than the fact that female players are finally being allowed wear the IRFU senior crest. Griffin’s calm demeanour also made short shrift of the initial Canterbury jersey launch that opted to put the male players up in lights while using female models.

“We are focused on playing and actually wearing the jersey,” said Griffin. “It was unfortunate but, as we know, Canterbury put their hand up and took responsibility for their error around the launch.

“Like you expect in rugby teams, when you make a mistake you put your hand up.

“It does make a massive difference that girls out there can wear the women’s jersey. Like, my cousins, who love playing rugby, can now wear the same jersey as me. Those things make a difference in terms of girls seeing that it is accessible.”

Interestingly, the players have played no competitive rugby since losing 27-0 to England on February 23rd as their training camps clashed with club matches. They have been playing internal “15 against 15” games.

To complete the 2020 Six Nations, Ireland face France in Lille on Sunday November 1st. The IRFU have been asked to clarify if the squad, like their soccer counterparts travelling to Kiev, will charter a plane.