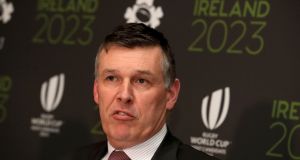 IRFU chief executive Philip Browne. Whether the IRFU were right to adopt some of the tone contained in last week’s leaked letter to World Rugby is another matter. Photograph: Dan Sheridan/Inpho

Could it possibly be that the sheer scale of the Springboks’ record beating at the Aviva Stadium might actually inch one or two World Rugby Council voters to the conclusion that South African rugby is indeed in such dire straits that they really do need the 2023 World Cup more than anybody? Only kidding, of course.

Then again, who knows what criteria will ultimately decide the minds of voters. Ultimately, it’s a secret ballot, and those who pledge their votes one way, might actually vote another.

If nothing else, it’s been a fascinating process, and it will be equally intriguing when the council makes their fateful decision in London as to the whereabouts of the 2023 Rugby World Cup.

With two losers, there will be plenty of postmortems and judgments made with the benefit of hindsight. However, amid all the recriminations since the evaluation report by Rugby World Cup Limited’s technical advisory committee recommended South Africa on October 31st, it’s worth noting that the report specifically stated that all three bidding countries could host an excellent 2023 World Cup.

Hence, the IRFU, the GAA and the two Irish Governments were entirely justified in putting together an attempt, however ambitious, to host the tournament.

Indeed, in the area of “financial and marketing”, the Irish bid scored reasonably well with its South African and French counterparts.

It was with regard to the Irish stadiums which accounted for virtually all the discrepancy between their bid and that of South Africa’s. That’s fair enough. Ireland don’t have the same scale of stadiums, and in some cases were not even a work in progress, albeit were the same criteria and scoring system applied in 2005, the 2011 World Cup would never have taken place in New Zealand.

Yet the Irish Oversight Board bid team, along with their French counterparts, are perfectly entitled to keep campaigning until tomorrow’s vote is taken.

They were also entitled to raise questions about the evaluation report, and how some criteria were weighted and evaluated differently from others. Whether the IRFU were right to adopt some of the tone contained in last week’s leaked letter to World Rugby is another matter.

Noting that Barclays had conducted a sovereign risk assessment of each bid for the 2015 and 2019 World Cup, the IRFU were well within their rights to ask if the same had been done this time. But referring to South Africa’s current sovereign credit rating as BB+, which the letter said “is defined as speculative grade (sometimes referred to as ‘junk’)” was surprisingly strong language.

After all it wasn’t so long ago when this country was on its knees financially. If a rival bid had referred to the Irish credit rating as “junk” one would imagine the reaction here would have been highly indignant, even if Ireland were in no position to bid for a Rugby World Cup during the post-Celtic Tiger crash.

One can therefore understand why South Africa has reacted so indignantly.

For sure, South Africa and France have bigger, ready-made stadiums. Nonetheless, as to actually filling the stadiums, the IRFU letter was entitled to ask what specific consideration was given as to how South Africa will achieve full stadiums. The IRFU letter also noted the “starkly empty stadiums in South Africa for significant fixtures”. This was fair game.

One of the many issues contributing to the decline in South African rugby is falling attendances. When the Cheetahs recently hosted Leinster as part of a double-header before a Currie Cup match, those with tickets for the latter game were afforded free entry. So were those who had tickets for the Springboks v Wallabies game in the same Toyota Stadium in Bloemfontein a week later.

Barely a few hundred turned up.

By comparison, when Ulster had previously hosted the Cheetahs at the Kingspan Stadium there was an 18,000 sell-out. Filling stadiums is linked with the issue of security, which the IRFU was also entitled to raise given all three countries were scored equally.

South Africa will argue that one cannot compare provincial rugby with Test rugby, and that their “ticket bank” scheme, with cheaper pricing, worked similarly at the Fifa 2010 World Cup, as did their security measures.

But right now both Irish and French rugby have stronger fan bases for rugby than South Africa do, and that South Africa’s smallest stadium is 41,000 could be seen as a weakness rather than a strength.

Recall how the 2015 World Cup in England used Exeter’s Sandy Park and had full houses of 12,300 for the Tonga-Namibia, Namibia-Georgia and Italy-Romania games in Exeter, as well as 16,500-capacity attendances for four games in Kingsholm.

To believe a similar batch of games will all achieve 40,000-plus attendances in South Africa looks fanciful in the extreme.

Last week, The Irish Times learned that the South African Rugby Union had confirmed in writing to World Rugby that if they didn’t win the recommendation they would withdraw from the bidding process.

Why on earth would they do that?

Yes, it could be interpreted as an honourable course of action, but there was no requirement to do so, and neither the French nor Irish bidding teams did. Why pull out if there was little between two or three of the bids, or if the report stated the bidding country was capable of hosting an excellent World Cup?

The evaluation report merely made a recommendation, which World Rugby advised was to be considered by council members before making their decision tomorrow. The ballot is the conclusion of that process.

Viewed another way, notifying the governing body of their intention to withdraw from the bidding process if they didn’t win the recommendation could also be interpreted as applying pressure on World Rugby.

1 Gordon D’Arcy: If South Africa moves up north, it could all go south
2 Charlesland Golf Club set to close permanently in December
3 Mikel Arteta: Liverpool are at ‘the level we have to reach’
4 When Down’s 1960 All-Ireland victory brought down barriers
5 Tour de France: Every yellow jersey winner must feel guilty by some association
Real news has value SUBSCRIBE

‘A real coup’: Villa sign Barkley on season’s loan from Chelsea 21:06
Mikel Arteta: Liverpool are at ‘the level we have to reach’ 21:04
Premier League clubs spend more than £1bn during transfer window 21:12
Newcastle survive almighty scare before seeing off Newport County 20:12
NFL to reschedule Tennessee v Pittsburgh game due to Covid-19 19:01
Crossword Get access to over 6,000 interactive crosswords