Wales and Scotland blamed for failure of Irish RWC bid 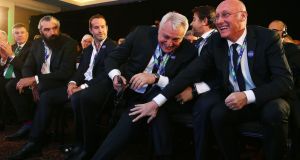 The French delegation reacts as France is named to host the 2023 Rugby World Cup, during a ceremony in London on Wednesday. Photograph: Jordan Mansfield/AFP/Getty Images

The failure of fellow Celts Wales and Scotland to support the Irish 2023 Rugby World Cup bid is believed to have been critical in Ireland losing out to France in their attempt to host the event.

Although it was a secret ballot, Scotland is believed to have submitted its three votes in favour of the French bid, with Wales backing South Africa.

If Ireland had secured those six votes, it would have finished the first count on 14 votes, ahead of South Africa on 10, who would have been eliminated. Ireland would then have contested the second count against France and members of the Irish delegation were certain yesterday that they would have then received an additional three votes apiece from New Zealand and Australia. This would have seen Ireland achieve the required quota of 20 votes.

After France was declared the winner, the IRFU chief executive Philip Browne could scarcely conceal his or the Irish delegation’s acute disappointment.

“It’s very disappointing. It was particularly disappointing that Scotland and Wales didn’t support their nearest neighbours,” he said. “We’re partners in the Pro14, you would have thought they’d at least support us, but, as I said in the press conference, Scotland went for the money and Wales went out of solidarity with Gareth Davies. England supported us and we have to thank England for that.”

It is understood Scotland voted for the French bid on the premise that it would generate a greater financial dividend for World Rugby. Wales are believed to have supported South Africa, World Rugby’s preferred candidate following an evaluation process, as the Welsh Rugby Union chairman Davies is also the chairman of the board of World Rugby.

Dick Spring, chairman of the Ireland 2023 Bid Oversight Board, said he thought there would be greater support for Ireland’s application from neighbouring countries. “In reality we were expecting more support from the home unions and it looks like we didn’t get that,” he told RTÉ.

Shane Ross, Minister for Transport, Tourism and Sport, said: “Sadly, the day is not ours. However, I predict that there will be a lot of Irish people taking holidays in France in 2023.”