Underwhelming first-half display from home side hands Scarlets the initiative 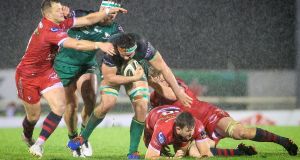 Connacht’s Paul Boyle is tackled by Steff Hughes of Scarlets during the Pro14 clash at the Sportsground. Photograph: James Crombie/Inpho

What was supposed to be a momentum-building first home Pro14 fixture in six weeks for Connacht at the Sportsground was a frustrating damp squib, a losing bonus point of little consolation.

Scarlets departed the wild west with all that was necessary to propel themselves into second place behind Munster in Conference B.

It was an opportunity lost for Andy Friend’s side.

Understandably frustrated, Friend says Connacht provided Scarlets with everything they needed, the energy and the belief.

“I said at half time, rarely since I have been here seen us out-enthused at the Sportsground. It was embarrassing, Much much better in the second half, but you can’t give a team like Scarlets 40 minutes to warm up and that much belief.

“Their execution was better than ours in the 22, and then we are chasing the game, and with the Galway weather coming in the way it did tonight, definitely our fault and a lot of disappointed people.”

The visitors were high-fiving as early as the seventh minute, capitalising on a penalty to touch to launch an attack from left to right. Man of the match, fullback Johnny McNicoll injected the pace before winger Ryan Conbeer crossed in the corner for an unconverted try.

Connacht, looking uncharacteristically shaky early on, used a scrum penalty to launch, and with Shane Delahunt and captain Jarrad Butler maintaining the momentum, No 8 Abraham Papali’i forced his way over for his debut try, with Jack Carty adding the extras for a 7-5 lead.

Then, however, Scarlets grabbed all the momentum, taking advantage of any opportunity leaked by the home side. McNicoll again provided the spark for Conbeer to bag his second try, before Dan Jones added penalty for a 7-13 half-time lead.

Although a strong direct run from Paul Boyle showed how Connacht planned to respond, Scarlets struck again, capitalising on an attempted chip to gain possession with Johnny McNicoll providing scrumhalf Dane Blacker who finished off for a 20-7 lead.

Thereafter Connacht, and the weather, threw everything at the Scarlets. Creating a host of scoring chances, all were too easily thwarted until Ultan Dillane touched down from a forward drive, and Carty’s conversion closed the gap to 14-20.

Struggling to provide the clinical finishing, Connacht were denied another opportunity at the death, and that was as it good as it got for the home side.

Chelsea set to sack Frank Lampard and bring in Thomas Tuchel 10:25
Six Nations 2021: Tadhg Furlong and Rhys Ruddock return to Ireland squad 10:43
The Offload: Ireland’s succession issue at 10 on show once more 10:46
All in the Game: Fenerbahce’s Mesut Özil fundraiser 10:00
Man United just the latest team to expose Liverpool’s defensive flaws 09:12
Here is your handy guide to sport on television this week