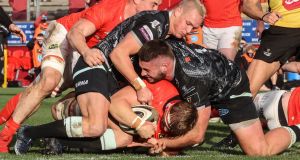 Gavin Coombes scores one of his three tries against the Ospreys. Photograph: Billy Stickland/Inpho

The victory belonged to Munster, the afternoon to their 22-year-old number eight and man of the match, Gavin Coombes. The 22-year-old Skibbereen native scored a hat-trick of tries, similar in orientation, close range finishes, that showcased his power, amongst other attributes in what was an excellent individual performance.

Speaking afterwards Coombes said: “I’d say it (his last hat-trick of tries) was for the Under-15s playing for Skibbereen. My main attribute is my physicality. The lads are putting me in the position to score tries.” Munster’s backrow excelled, indeed the entire pack with Kevin O’Byrne very much to the fore dominated their opponents when the game was a contest.

They bullied the Ospreys up front, particularly in the lineout maul, and the collective ability to break the gain-line ensured that Craig Casey was able to positively influence the game. Rory Scannell and Damian de Allende forged impressive gain-lines while Mike Haley offered a sharp presence in attack. The only downside was a leg injury sustained by JJ Hanrahan; Ben Healy proved a capable deputy.

The Ospreys were poor, they played fitfully - fullback Mat Protheroe was a shining exception, so too Luke Morgan despite his yellow card - and were largely ill-disciplined and careless. By the time they mustered some coherence the game was over.

The home side lost a little shape and dynamism in that last 20 minutes, a combination perhaps of wholesale changes and a little mental laxity; understandable as they led 38-10 at that point. The Ospreys’ grit allowed them to score two tries during the final quarter through replacement hooker Dewi Lake and a penalty try, immediately after Munster captain Jack O’Donoghue was binned for cumulative team transgressions.

The visitors had the temerity to take the lead, Protheroe’s great break released Luke Morgan who crossed unopposed. Stephen Myler kicked the conversion. Munster’s response was patient and precise working through the phases inside the Ospreys 22, but Coombes still had plenty to do when faced by three defenders a couple of metres from the line, a task which he accomplished with ease.

JJ Hanrahan kicked the conversion to bring the sides level at 7-7 and soon after Haley didn’t hesitate when latching onto a bouncing ball inside the Ospreys 22, stepping inside one tackle to glide over the line.

Rory Scannell kicked the conversion as Hanrahan continued to recover from a bang to his leg; it forced him off after 22 minutes, replaced by Healy, whose first assignment was to kick a penalty. Myler responded in kind for the visitors before the Ospreys penchant to self-destruct surfaced once again just before the interval.

Shaun Venter’s kick was charged down inside his 22, compounded by conceding two penalties and a yellow card, for wing Luke Morgan, that proved the preamble to O’Byrne being driven over from a lineout maul that contained a couple of the backs. Healy added a fine conversion.

Casey, a sharp and busy presence, was alert enough to eke out a gap, scrambling forward on hands and knees to within a metre of the line, Coombes was the prime beneficiary as he powered over around the fringe of the ruck. Healy kicked the conversion and Munster had their bonus point try. Their fifth came on 53-minutes when the number eight took a quick take penalty from five metres, easily swatting aside some brittle defence.

Despite the Ospreys late revival of sorts, Munster coach Johann van Graan will be pleased that the province emphatically maintained an unbeaten start to the season and that it’s been accomplished with several standout performances for the younger cadre.