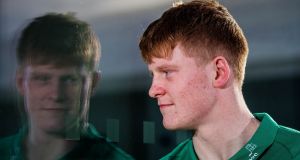 What’s in a name? Well when yours is Sean O’Brien and you play rugby, a little clarification is required in the current climate. On Friday night, Delgany born Sean O’Brien is likely to make his debut as part of the Ireland team in their opening Under-20 Six Nations Championship against Scotland at Musgrave Park (7.15, live on RTE 2).

Nor is he, Sean O’Brien the 21-year-old, first year Connacht academy wing/ centre and younger brother of Leinster centre, Conor. There is one tie that binds all four apart from sharing a name; they have all been capped at Under-20 level for Ireland.

Irish rugby’s youngest Sean O’Brien (19) was educated at Blackrock College where he won a Leinster Senior Cup medal as a fifth year but conceded that it was a growth spurt in Transition year that propelled him from peripheral figure to central casting. He initially played soccer for Greystones Utd and golf in Delgany before rugby took over.

He explained that he was a substitute at JCT level and in fourth year was cut from the panel at Christmas. A tour to New Zealand the following summer coupled with his physical development allowed him to become an integral part of captain, Liam Turner’s winning SCT team as a fifth year. He was picked for the Ireland Schools team a week after that success and the progression pathway has been smooth since.

He’s long since learned to brush off “a few smart remarks off people from time-to-time (about the glut of Sean O’Briens), but it’s grand. I don’t really mind it.”

His preference is for blindside flanker but he can play in all positions across the backrow. “I think I am quite good at ball carrying. I just try to be pretty good at everything. I don’t think there is anything in particular that I am brilliant at. I always make sure that I am working really hard to carry and tackle a lot. I can jump in the lineout as well, which is quite handy.”

Having worn a green jersey for the first time at Schools, Friday night will feel a little different. “It really is special. The very first time, you are just kind of taken aback. I was really surprised when I first got called up (for the Schools).

Training camps in Fota Island were once again used as a preparatory tool and many of the things that were put in place during last season’s Grand Slam success are once again prevalent: no mobile phones at dinner and Dublin footballer Kevin McManamon helping them with the mental side of sport.

“We did a lot of exercises in team building. We really got to know each other well. We were just all making a really big effort to take ourselves out of comfort zone.

“There are 20 lads from Leinster here; it would be so easy for me to sit with them the whole time. We are all rooming with lads from different provinces and having meals with lads from other provinces as well to build that real bond, which you are going to need going into the Six Nations. It’s been really good.”

O’Brien doesn’t have to look far for inspiration, Caelan Doris’ selection for the Ireland team to face Scotland, so too the presence of Ronan Kelleher on the bench, that the journey from the Irish 20s to senior status can be a swift one. “The two lads in the Leinster at the moment, Caelan Doris and Max Deegan have really been excellent in terms of setting the standard for a backrow.

“I have been up to UCD once or twice and just seeing how they train and how the play. They are doing what everyone should be doing really. Caelan Doris would have been just three years ahead of me in Blackrock so to see how far he is gone since he left school, gives you great encouragement.

“It just shows if you keep your head down and work hard at U-20s level like he did, he was excellent, if you can do that, then really you can go the whole way like he has.”