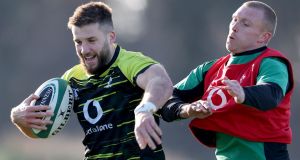 Refreshed and recharged, Ireland will look to put their latest defeat in Twickenham behind them and generate some momentum and confidence going into both next week’s finale and next year’s Six Nations. A convincing win against Georgia while putting to rights some of the issues raised again last week is the least requirement.

While the first of the four defeats in a row by England on the opening weekend in the 2019 Six Nations still has ripple effects to this day, Ireland have nonetheless won 19 of their last 20 home Test matches, including their last seven in a row. Extending that to nine over the next two weekends, in all probability with Scotland to come to the Aviva Stadium next week, would also be timely with the visits of France and England in 2021.

Nor have Ireland suffered back-to-back defeats in Test rugby since losing the second and third matches of their series in South Africa in June 2016, and that isn’t going to be revisited here, even if the 37-point handicap looks steep on the basis of Georgia’s defiant performances against England and Wales to date.

With five Ulster players among the nine recalled to the starting line-up by Andy Farrell, perhaps fittingly Georgia have two notable former halfbacks from that province in their backroom team, David Humphreys as a consultant and Neil Doak as backs coach.

The Georgians, missing half a dozen or so of their frontline players on this tour, are also using these games to rotate their squad and expand their playing pool. Hence coach Levan Maisashvili has made six changes to the starting team from last week’s 18-0 defeat by Wales.

Up front, Shalva Mamukashvili comes in at hooker with Nodar Cheishvili and Lasha Jaiani forming a new secondrow combination in the absence of last week’s go-to man in a largely impressive lineout, Kote Mikautadze, who is out with a rib injury. Biarritz openside Tornike Jalagonia is also restored while fullback Soso Matiashvili, absent last week through injury, and winger Tamaz Mchedlidze, making his first start since February, come into the backline.

There are two potential debutants on the bench in 20-year-old scrum-half Mikheil Alania and 18-year-old fullback David Niniashvili.

Eight of their starting line-up and 11 of their matchday squad are based in France, with a further three in England, and as usual they are well stocked with four frontline props who have established themselves in the top 14, notably the Toulon tighthead Beka Gigashvili.

Whereas Ireland have averaged the most possession (60 per cent) and territory (60 per cent) in the opening two rounds of the Autumn Nations Cup, Georgia have had the least territory (35 per cent) so far. While this partly explains their failure to register even a point in their two games to date, it also illustrates how resilient they’ve been in their own half and 22.

They’ve looked well organised as well as committed, filling the spaces and covering the edges, where they’ve only been outflanked twice.

The Lelos have also made exponential improvements along the way, most notably in their lineout maul defence. That was the direct source for four of Scotland’s eight tries in their warm-up defeat in September at Murrayfield, when losing 48-7, and three of England’s six when losing 40-0 at Twickenham a fortnight ago. But they kept the Welsh maul at bay in conceding no tries from catch-and-drive when losing 18-0 at the Parc y Scarlets last week.

They’re as physical in the collisions as most Tier 1 countries too. Indeed, Georgia have also made the joint most dominant tackles (26) in the Autumn Nations Cup (which is level with England), blindside Beka Saginadze leading the way with nine of them, which is four more than any other player in the competition to date. James Ryan leads the way for Ireland with three.

Georgia grew into the game against Wales and, even when reduced to 14 men for 10 minutes in the second half, began to play with more ambition and width, as they looked to play the ball out of the tackle.

The Brive halfbacks Vasil Lobzhanidze and Tedo Abzhandadze, who are also starting their 14th Test together, are tidy players and in captain Merab Sharikadze and Giorgi Kveseladze, they have centres who like to offload.

Their Bordeaux number eight Beka Gorgadze is a class player, hugely effective on both sides of the ball and with an impressive skill set as well. The 24-year-old Georgian draws plenty of comparisons with his near-namesake Mamuka Gorgodze – the Lelos’ most renowned rugby player.

On the four previous occasions the countries have met, three of Ireland’s victories have been by margins of 40+ points; the exception being the 14-10 win in the 2007 Rugby World Cup pool match on a sweltering and uncomfortable evening, in every sense, at the Stade Chaban Delmas in Bordeaux. Ireland were ultimately grateful to Denis Leamy for positioning himself under the ball to prevent what would have been the most embarrassing defeat in Irish rugby history.

This time Ireland will desperately want to avoid any such discomfort, more in the manner of their only meeting since, when scoring six tries to beat Georgia 49-7 during the 2014 autumn internationals.

Furthermore, Ireland are unbeaten in their last 41 games against teams not currently regarded as Tier 1 (40 wins and a draw), dating back to their defeat by Samoa at the old Lansdowne Road in November 1996.