Allister Coetzee hails Ireland as the ‘New Zealand of Europe’ 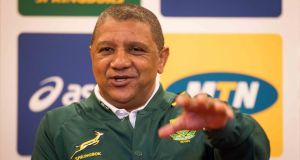 Allister Coetzee: “They’re class acts, but we can’t just focus on Conor Murray and Johnny Sexton. There are other great players in the side as well.” Photograph: Morgan Treacy/Inpho

The head coach of the Springboks, Allister Coetzee, has described Ireland as “the New Zealand of Europe”, highlighting in particular the “world-class” half-back pairing of Conor Murray and Johnny Sexton in the build up to next Saturday’s sold-out Test at the Aviva Stadium.

Maintaining that their last outing, when losing 25-24 to the All Blacks in Cape Town four weeks ago, represented the standard required for their four-match tour, which also takes in games against France, Italy and Wales, Coetzee said: “For us it’s important because we have a huge respect for Ireland. They are a quality side, and it’s almost close to your All Blacks’ side in Europe.”

“If you look at their half-backs’ [Murray and Sexton] history against the All Blacks, I think they’ve won three of the last four and it says a lot,” added Coetzee, although taking in Chicago and the Lions Test series actually it was two wins and a draw in the last four meetings with New Zealand.

“They have a great coaching staff. Joe is a great guy, a really good coach, and Farrell, his defence coach, is really astute.

Of Murray and Sexton, he added: “Top-class, mate, top notch. It’s great to have a half-back pairing as your spine. They’re world-class players.

“They know what they’re doing. They know how to kick, to pass the ball – great core skills. They’re class acts, but we can’t just focus on Conor Murray and Johnny Sexton. There are other great players in the side as well. It’s important to understand where the onslaught will come, the attack, and how to stop that.

“For me momentum is generically what you want in a game, so you must be able to deal with their big ball carriers. You have to be able to deal with Conor Murray and Johnny Sexton’s aerial bombardment, and then from broken play and counter-attack they can be very, very dangerous. All the teams prepare for that, and we’ve got to build on our last showing.”

Referring again to the Murray-Sexton axis, Coetzee said: “And the line speed killed the All Blacks, yea? So that’s the other thing we have to deal with.”

In addition, there is the memory of Ireland’s win in 2014, when Coetzee recalled how the Irish halves kicked the ball in behind the Boks’ left winger Bryan Habana. And he reckons Ireland “will be still hurting” from the 2-1 series defeat last year in South Africa.

“We must be able to deal with whatever they come up with. There will be something new, something innovative, so we expect that. I think we understand that you cannot come here with that Southern Hemisphere mindset and try to play in the Northern Hemisphere. So we have to adapt.

“We’ve faced a few different weather conditions in the Rugby Championship. At this point in time the prediction is looking good for Saturday weather-wise, but what might not be important is the aerial game in Super Rugby, in the Northern Hemisphere you will face an aerial bombardment, and we will have to deal with that. “And we know how good Johnny Sexton and Conor Murray are as prolific kickers of the ball, and that is an area which they see as an attacking opportunity as well. The other big thing is the physicality. That is a given in this game, but we have to be smart with our detail this weekend. They are quite an innovative side as well. Good running lines and defensively we will have to make sure that we can stop that momentum from all angles on the field,” said Coetzee, also pinpointing discipline.

Against that, Coetzee declared that Even Etzebeth, who has captained the side in Whiteley’s absence, and back-rower Uzair Casseim are fully recovered from ankle and rib injuries.

Reflecting on last November’s tour, when the Springboks lost to England, Italy and Wales, Coetzee said: “To be honest with you, I was personally worried about our conditioning and this time around I don’t have that sort of fear at all. “I’ve learned also in the past that three points in the Northern Hemisphere is quite vital to keep that scoreboard ticking,” added Coetzee, who admitted he had a decision to make at out-half given that this year’s incumbent Elton Jantjies has been playing with his Japanese side the Shining Arcs for the last three weeks, whereas Handre Pollard, who started the defeat in Dublin in 2014, has been training with the squad.

“With Elton being away for a couple of weeks now and not training with us, do I go with him or Pollard, who has trained with us? That’s a decision I have to make in terms of how well prepared they’re going to be.”