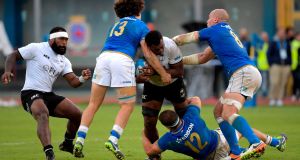 Italy ended a nine-match losing streak with a hard-fought 19-10 victory over Fiji in Catania on Saturday as their Irish-born outhalf, Ian McKinley, became the first man to play in international rugby in specially manufactured goggles.

The 27-year-old former Leinster player lost the sight in his left eye in an on-pitch incident seven years ago but recovered to return to the game and qualify for Italy through residency after joining Italian side Benetton.

McKinley came off the bench as a 61st-minute replacement for Carlo Canna and kicked a penalty to help edge Italy to victory. Canna had earlier struck three penalties and converted Simone Ferrari’s early try.

The visitors, for whom Ben Volavola kicked a penalty, went in level at 10-10 at half-time through Leone Nakarawa’s converted try, but Conor O’Shea’s side edged ahead after the interval to avenge their summer defeat by the Fijians.

New FAI president set to be elected on Saturday 19:22
NFL Division Two: Malachy Clerkin’s team-by-team guide 18:00
Darcy Graham ruled out of Scotland’s clash with Ireland 17:44
Magic Wand bids to go one better in $1m Pegasus World Cup in Florida 17:41
Ben Stokes involved in verbal altercation with fan in Johannesburg 17:38
Here is your handy guide to sport on television this week