Archive footage from 1931 shows Ireland taking on South Africa in only the third ever rugby test between the two nations, Ireland fell to a third straight defeat - losing 3-8 at Lansdowne Road. Video: Reuters 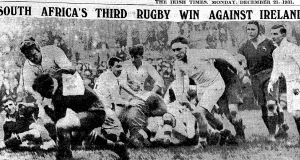 The following match report appeared in the Irish Times on Monday, December 21st, 1931

Springbok forwards subdued but not mastered

The final score of a goal and a try to a penalty goal in favour of the South Africans about properly represented the slight superiority of the visiting team.

It was a fairly contested game, with conditions as perfect as possible and favouring neither side, but was played before a crowd which did not number more than about 26,000.

All along the the Irish forwards strove manfully to get the better of their strong opponents; they tried to counter their clever tactics by plans set out for them by George Beamish on the previous day, but though to an extent they kept them in check they never mastered them. It was in the scrimmages that the strength of the Springboks lay, and so much so was this the case that one wonders whether their formation of 3, 4 and 1 is not better than the Irish way of forming.

Them was no smashing up of the Irish forwards. They, played a magnificent game, but were simply unable to prevent the Springboks from getting possession about eight times out of ten. The result was that we saw the ball going out with regularity out the South African side of the scrimmage, and the Irish backs were engaged for most of the match in chasing and tackling their speedy opponents. This they did with such great success as to prevent the Springboks from crossing their line in the first half.

Ireland was certainly, fortunate in this period on the score that Brand, usually one of the most reliable of kickers, hit an off day, and actually missed four chances which in ordinary times he would have kicked penalty goals from. The Irish forwards fought back splendidly in the loose play and nearly brought off a score when (Noel) Murphy was held up on the line, and it looked as if the game was about to turn our way when (Laurence) McMahon brought off a penalty goal three or four minutes from call of half time.

Just previous to this (Paul) Murray had hard luck with a drop ar goal which only missed the mark by a small margin.

It was with every reason for confidence that Ireland entered on the second half, but this confidence was somewhat shattered five minutes after resumption when (Capt James) Egan failed to catch the ball from a kick by (Bennie) Osler and (Morris) Zimmerman was presented with a score. There was still every chance of an Irish victory, as our forwards were keeping up their splendid play and giving back us much as they got, except in the matter of securing possession in the set scrimmages. Egan redeemed his reputation by some fine play subsequently, and was not far out with a splendid attempt to drop a goal from close to the touch line, but, unfortunately, he was guilty of another lapse later which again contributed to a great extent to another try for South Africa, which was converted.

Previous to this score on the movement which brought play so close to the Irish line (Danie) Craven was allowed to carry on after a palpable knock on.

In the remaining ten minutes of play Ireland never looked like getting on terms again, but they never relaxed in their efforts, and they lost gallantly.