Ronan O’Gara confirms he is in talks with Crusaders

‘Communications have started between the clubs . . .I’m not going to run away from it’ 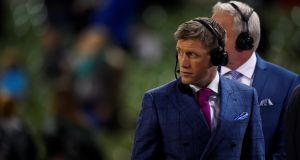 Ronan O’Gara has confirmed that he is in talks with New Zealand’s Canterbury Crusaders over a move to Super Rugby next season.

It was reported earlier this week that the former Munster and Ireland outhalf is being targeted as an assistant head coach to Scott Robertson in 2018.

His current contract with French Top 14 side Racing 92 is until July 2019.

Talking on RTÉ ahead of Ireland’s autumn internationals Test against South Africa at the Aviva, he said “I’m in contract until July ’19, the horse has bolted big time with the story.

“Communication has stated between the clubs . . .  There has been contact there, I’m not going to run away from it. But also you have to respect the fact that I’m really enjoying what’s going on in Paris, you have to take if from my point of view that I go to work there on Monday morning so let’s wait and see.”

While the Crusaders have won a record eight Super rugby titles and would be a very attractive move for O’Gara, the news (first reported by the Irish Examiner) could come as a blow to Munster and Ireland back Simon Zebo. He will join the Paris based club next season.