Ireland braced for a daunting assignment in Paris 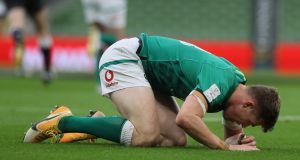 Garry Ringrose: sustained a broken jaw in Saturday’s 50-17 win over Italy and so will miss the game against France in Paris next Saturday. Photograph: Brian Lawless/EPA

The scale of the task facing Ireland in an empty Stade de France next Saturday night was laid bare by France’s friendly win over Wales on Saturday night. Utterly unfazed by trailing 10-0 after seven minutes, Les Bleus scored five tries to win pulling away, by 38-21.

That game was a dry run for the 2020 Guinness Six Nations finale, and once again come the 9.05pm kick-off local time, 8.05pm Irish, next Saturday, Paris will have gone into curfew. Yet in dissecting the Welsh defence, it was as if France were playing in front of 80,000.

Back to full strength, with two-try Antoine Dupoint and Romain Ntamack (both of whom would have been injured for the scheduled meeting in March) pulling the strings, beating this French team looks a tall enough order, never mind doing so with a bonus point. Come kick-off, that may well be the requirement if Ireland are to win the title, presuming England dip their bread in Rome beforehand.

France do have a concern over concussed fullback Anthony Bouthier, with half-time replacement against Wales, Thomas Ramos, next in line. They may also need to reconfigure their pack with lock Bernard Le Roux facing a lunchtime Zoom disciplinary hearing on Tuesday for a cheap shot on Alun Wyn Jones, who equaled Richie McCaw’s world record of 148 caps.

By contrast, Ireland have again lost Garry Ringrose, who is sidelined for four to six weeks with the broken jaw sustained in Saturday’s 50-17 win over Italy.

Robbie Henshaw will assuredly come into midfield, and with Shane Daly, Chris Farrell and Stuart McCloskey the only other backs in the squad, it would be no surprise to see Keith Earls, if deemed fit, called in and named on the bench.

Ireland have only beaten France in Paris three times in the Six Nations era, albeit they clinched the title there in 2014 when completing the same sequence of fixtures and, thus far, results, but Andy Farrell is under no illusions as to the task ahead.

“Just to win in Paris is very tough isn’t it? We all know that. The squad that they picked this evening is a very strong squad so to go over there and get any form of win would be a tremendous achievement. I suppose as the game goes on we will see how it falls and we will adapt accordingly.

“But, yeah, we are certainly not getting ahead of ourselves and being brash enough to say we are going to go over to Paris as though everything is going to go according to plan and we will come up smelling of roses, you know, that we are going to get four tries against them. I am sure Shaun Edwards would have something big to say about that,” said Farrell in reference to the French defensive coach, who had a habit of negating Ireland’s attack in that role with Wales.

“So we just have to concentrate on the performance, we have got to make sure that we tidy up a few things that we have learned from today. We have to finish off the tournament well and hopefully that gets us through.”

The IRFU’s annual financial report last Friday showed that they had received €1.65m from the Six Nations prize fund on the premise of them finishing at least fifth. Finishing fourth would increase that pay-out by €550,000 to €2.2m, with third place earning €2.75m and second €3.85m, while finishing first would land the first prize of €6.6m, and hence almost €5 million more.

Were this Irish team to do that, IRFU chief executive Philip Browne and newly-elected honorary treasurer Patrick Kennedy would be down on bended knee in gratitude.