Fascinated by the theatre of rugby, the England head coach is often dismissed at the clown 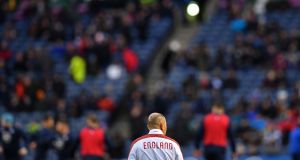 England head coach Eddie Jones checks out the pitch conditions ahead of the Six Nations match against Scotland at Murrayfield. Photograph: Paul Ellis/AFP via Getty Images

One of the Japanese team hotels during the 2015 Rugby World Cup was located a few blocks back from the River Thames behind the Houses of Parliament in central London. It was modest accommodation on the corner of a quiet square. Inside a little room a dozen or so wooden chairs were set out for interviews on the ground floor.

Unlike English splendour in the Pennyhill Park Hotel in Surrey’s stockbroker belt, the Japanese show was off Broadway. But they had a star. It was Eddie Jones. Jones was the front man, the hand shaker, the coach who sat you down and called you ‘mate’ and gave candid insights into other teams and his own. Jones was affable and generous with his time, moving from one outlet to the next having one-to-one conversations with whomever wanted. Jones exhausted the media core. He didn’t leave the room until the last body had filtered out. It was another side to the current England coach.

Japan would soon send a tsunami through the world of rugby by beating South Africa, the context of the win making it heart-warming and stunning. Japan had won only one World Cup game in their entire history and had lost every other World Cup match by an average of 48 points, while the Springboks had already been world champions twice.

As he has shown as recently as the last few weeks, Jones can also predictably play to caricature. But it would be to entirely miss the man to paint him as a central casting misfit or cartoon character. So too might the former secondary school teacher enjoy a lazy, binary portrayal as it would greatly underestimate him. For the ultra competitive 60-year-old any underestimation represents an advantage.

Whatever Jones says or does it has usually been to deflect attention, sometimes towards himself, sometimes onto individuals on other teams. The complex part of him also deliberately makes some remarks wilfully cruel. But he doesn’t sweat the personal animosities. They come hand in glove with a distinctive brand of blunt, off-colour opinions, which have come to define his public persona.

Recently the BBC’s Sonja McLoughlin pushed him on why, as an intelligent man, he chose to use pejorative language such as inflicting “absolute brutality” on France. She might have added the more egregious 2016 comment Jones made about Johnny Sexton.

“Sexton is an interesting one,” he said at the time. “They’ve talked about him having whiplash injury which is not a great thing to talk about. I’m sure his mother and father would be worried about that. Hopefully, the lad’s all right on Saturday to play.”

Prominently blazed across World Rugby’s page on Laws of the Game are the words ‘Integrity, Passion, Solidarity, Discipline, Respect.’

“We want to go out there and smack Italy,” said Jones in the same year he targeted Sexton. “I said to the boys ‘go out there and give them a good hiding’.” They did, beating them 40-9 a week after winning the Calcutta Cup against Scotland. Is it the Panini Cup in Italy Jones mused?

His reply to the BBC was a simple. “I enjoy doing it.” But McLoughlin wasn’t satisfied and pushed him further.

It was also pointed out that the ‘brutality’ remark made before playing France a few weeks ago effectively drew attention away from speculation that the punishment Premiership side Saracens received for breaching the pay cap was having a detrimental effect on England team morale.

For the public it was more junk from the rough around the edges and straight out of the Warren Gatland playbook. Or maybe Gatland got it from Jones when he made the comment that Wales disliked Ireland more than any of the other nations. But remarks have again placed Jones in a position he seems most comfortable, at the periphery of the starched white collar club that is English Rugby Union.

The needless ill will he generates is not a recent acquisition. From the time Jones was a child growing up in the Sydney suburb of Chifley, part of the Randwick hinterland, he was declaring that he preferred Rugby League.

Mark Ella, one of the most gifted outhalves ever produced by Australia was a childhood friend. Of aborigine origin, Ella, his twin Glen and younger brother Gary went to the same kindergarten as Jones. It was Mark who chummed around the neighbourhood with him, a pair of urchins playing mainly cricket and rugby.

“He has an extremely witty, at times vicious sense of humour,” said Ella in 2016. “He was also an accomplished cricketer, and he and David Knox, who went on to play for Australia, were the kings of the sledgers.

“Oh, his tongue was lethal. We used to play indoor cricket, just 20-overs each. But at one point I had to walk away, saying, ‘You’ve got to stop sledging people. We’re just supposed to be mucking around’.”

When he was first appointed to coach the England team in the aftermath of the 2015 World Cup, the UK’s Daily Telegraph sent a journalist to Australia to divine the man from the myth through former team-mates and coaches. They wanted to understand what type of character English rugby had brought in to their midst.

One of the people spoken to was 1991 World Cup winner and former Wallaby openside flanker Simon Poidevin. Now a wealthy financier in Sydney, it was Poidevin, a physically impressive player, who Jones nicknamed ‘Venus de Milo’ – “great body, no hands”.

Poidevin, who has no animosity towards Jones, predicted the England experiment would be either garlands or oblivion. “It will either be an amazing success or a huge blow-up,” he said. “There will be nothing in between.”

Jones is Japanese on his maternal side. He was born in Tasmania to a Japanese American mother and Australian father. He is married to Hiroko Jones, a Japanese woman whom he met while teaching at the International Grammar School in Sydney.

He is not unaware of conflict and prejudice, which makes some of his remarks the more puzzling. His mother Nellie was interned as a 16-year-old in an American camp after the attack on Pearl Harbor in 1941 and it wasn’t until after the war that his family was reunited. The Japanese heritage is significant and his mother’s resilience is embedded in the Jones DNA.

Those who have worked with him and played for him also point to a work ethic that is off the spectrum. So much so that some of the dozen or so teams he has coached since Randwick in 1994 throughout a bohemian career that included Japan, Australia and assistant in South Africa, could vouch for not only scorching words stripping paint off the walls but incredibly detailed planning.

He has introduced a different system to the way England play. The shape is a 1-2-2-2-1 pattern, where the English forwards split across the field within three pods of two, or two pods of two and one forward providing a “roaming” additional support option if needed. In attack England are also more inclined to run off their nine.

Japan, whose rugby culture Jones transformed, play in a similar way and it works particularly well for teams that do not have physical dominance. In the five years since beating South Africa and last year’s World Cup the numbers playing rugby in Japan had increased by between 150 and 200 per cent.

But the lifestyle and character has taken its toll and Jones suffered a stroke in October 2013, a year after taking on Japan.

“People always ask if the stroke changed me,” he told the Guardian last year. “It did. I think I became less intense and learned to relax more. I’m sure the England players will find that amusing.”

Less intense but just as passionate, it cuts only one way for Jones. Coaching elite teams, it’s a lifestyle, an addiction, a journey that can take wing or go badly wrong.

“This is why we do it, mate,” he told writer Donald McRae before the World Cup “This is why we don’t put on a suit every morning, pick up a briefcase and catch the same eight o’clock train into a routine office job. This is the feeling you get nowhere else in life. It’s this intensity, this fear, this hope, this thrill all knotted up in your gut. There is a need for courage in the face of adversity. This is what we do.”

Jones has been called a clown, a misfit, irritating, an eccentric and far worse indeed. But win or lose he will never be ignored whether it’s in an ante room in a modest London hotel or in Twickenham playing Ireland for the chance of a Triple Crown. That or an English rugby establishment ready to bare its teeth.