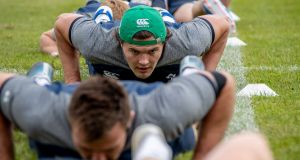 The Ireland rugby squad during their open training session in the Sportsgrounds, Galway. Photograph: Morgan Treacy/Inpho

Johnny Sexton, who celebrated his 34th birthday on Thursday, will be available if required for Ireland’s opening Rugby World Cup warm-up match against Italy at the Aviva Stadium on Saturday, August 10th.

Ireland’s head coach Joe Schmidt confirmed that the outhalf had sprained his thumb last week, would be back passing a ball next week when the squad decamps from Galway to Limerick for their fourth week of pre-season conditioning and fully integrated into training the week after.

A 45-man Irish squad – Ulster’s Will Addison was added to the original extended roster having recovered from back surgery – were put through their paces in a training session open to the public at the Sportsground.

Addison underwent an operation in April having missed the Six Nations Championship because of the back issue. His last game for Ulster was a Champions Cup match against the Leicester Tigers at the end of January. A spokesperson said Addison “had got through a heavy workload this week”, and that he would be training fully, assuming no adverse reaction, in a couple of weeks.

A number of players nursing bumps and bruises sat out Friday’s session.

The Irish squad will be whittled down numbers-wise ahead of the Italy game, and further reduced in the week after that match. One player who understands that it is possible to come from the periphery of a squad to making the travelling party to a World Cup is Conor Murray.

He took that route in 2011 when the then Ireland coach Declan Kidney handed him an opportunity based on form and talent. Murray, speaking at the launch of Canterbury’s Ireland World Cup jersey, said: “I hadn’t thought about it until you said it there. People can come from nowhere as I found out in 2011. That’s probably a bit of motivation for myself and others that have been around for a while, not that you’d take anything for granted, but to push on and be in as good a position as you can be around the time that squad is announced.

“I had played with Munster towards the end of that Magners League season [when] I was announced in that [preliminary presumably] World Cup squad. Having a chat with the coaches my impression was just to come into the environment, train and try to pick up [good] habits and knowledge [from] the senior players at the time.

“I don’t know whether that was the truth or not. I suppose it let me come in with no pressure on my shoulders, enjoy it and soak up as much as I could. It ended up being a pretty special year.”

Murray got an inkling that he wasn’t going to be making up the numbers that year when selected for the game against France.

“I remember talking to Mick O’Driscoll in the airport when Deccie [Kidney] said I was going to be involved next week; or Les Kiss might have said it to me.

“Micko was like ‘Jeez, make sure you’re ready for this because they’re not just messing anymore, they’re probably having a serious look at you’. That was a bit of a pat on the back and a confidence-booster for me, and a very important stepping stone in my career.”

The Munster and Ireland scrumhalf is happy and healthy, and claims to be enjoying the grind of pre-season training, something he’ll swap for competitive fare next month when Ireland face Italy, England and Wales twice in matches ahead of departing for the World Cup in Japan.

“On the other side of it, you want to be playing in your best form or close to it to be able to hopefully get selected for the World Cup squad and kick on into those games because there’s no bedding-in period in Japan; it’s straight into really tough Test matches in tough, tough conditions. They’re really, really important. That’s why we’re working hard [now].”

Murray knows that Japan presents other challenges not least the weather having played rugby there 10 years ago with an Ireland’s Under-20 team. Several others would have been part of Ireland’s 2017 tour to Japan. “There are going to be a lot of challenges that we are not used to; climate being the one that sticks out for most people.”

Smaller beds and showers has also been a topic of conversation, with Murray smiling as he expressed concern for the plight of Devin Toner in that environment.

Murray concluded: “It’s been a really enjoyable couple of weeks getting back with the lads, getting down to work, and getting that tough fitness work into our bodies. We have a pretty big block [of time] to get this done. Rugby is being integrated slowly.”

That process will be accelerated with every passing week.