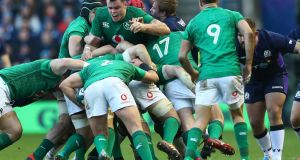 A fan not so long ago, James Ryan is not that familiar with, nor inclined to, watching Ireland any more. Since making his full debut against Argentina in the November window last season, last Sunday’s win in Rome was only the fourth of Ireland’s last 16 games which the 22-year-old lock has missed.

Unusually, that was the third time Ryan was rested from games against Italy, whom he has thus still to face, with the other one being against the US last November. As an aside therefore, Ryan’s 13-2 win-loss record in an Ireland jersey could be even more impressive.

He was rested, in part because of a minor niggle, for the round two home win over Italy last year as well, though the difference eight days ago was that he was in the Stadio Olimpico, not that that made it any easier.

“I’m probably a bad watcher,” he admits with a smile and more than a hint of understatement. “It’s not easy, you kind of hate being on the sideline watching. You feel kind of helpless. It wasn’t great at times but I think there was a small bit of relief towards the last quarter. I maybe got to enjoy it a small bit more.”

If ever a player deserved a rest, it was Ryan.

Last season, in what was effectively his rookie professional campaign, Ryan played 24 games (five of which were off the bench) and accumulated 1,356 minutes. This season, he has already played 15 games, all of them starting, and has run up 1,097 minutes.

And not only does Ryan usually play 80 minutes, or at any rate 70 minutes plus, but he consistently puts in huge shifts, with high, accurate tackle counts and likewise a high volume of accurate carries, usually in heavy traffic close to the breakdown.

His errors are eye-catching simply for their rarity. There’s also his effective clearing out and lineout takes, which will continue to increase in the absence of Devin Toner.

Brian O’Driscoll, for one, has raised concern about Ryan’s workload but Ryan himself maintained: “When I’m out there I’m definitely not going to hold back or mind myself. I don’t think that would be the right approach.”

“We have a big emphasis in national camp and with our province on our quarry; making sure we build up our shoulders, ankles and knees, creating that buffer so that if you do get a niggle you have that strength in that area.”

“I work pretty hard in managing those niggles, making sure my shoulder strength is where it needs to be. If I keep doing that it will work as a protector against injury.” And, for seemingly such a natural born professional, you don’t doubt him one iota.

In any case, Joe Schmidt had informed Ryan of his thinking for the Rome game soon after the round two win in Murrayfield, and though he may not have wanted a rest, he is refreshed for it.

“My body feels in a good place now. A few of the lads were a bit banged up after the weekend, because it was a seriously combative game. They [Italy] are big physical men. The lads that weren’t involved are definitely fresher coming in.”

As for his analysis of why Ireland again underperformed, and have not scaled the heights of last year, Ryan ventured: “I think we can just be a bit more accurate. I know it’s a generic word, but if passes start to stick a bit more, if we’re hitting the right lines I think it will start to happen for us. I think our set-piece is another area where we can get better coming in from last weekend.”

The harder they try, the more the errors pile up and the less they appear to be enjoying themselves. Suggest was the players’ body language in the Stadio Olimpico that they looked like a group who needed a good knees-up, and it transpired that’s what they did that very night.

Reflecting on their three-day camp in Belfast after Friday’s open session in Queen’s, Ryan said: “I think we got a good bit of work done. That was our main session today. We’ve just enjoyed each other’s company. Went out for a bite to eat a couple of nights ago and did the Black Cab tour yesterday morning. It hasn’t been all work, we’ve got to enjoy each other’s company a bit.

“We had a few beers in Rome after the game as well. So it’s important we can have a bit of craic and get away from the bubble. That’s important when things aren’t going quite right. In terms of doing things different, I think we’re not far away. Just trying to get that bit better. We’ll keep building and hopefully next week we can put the right foot forward.

“I think when we’re not performing at the level we know we’re capable of, maybe we can get a bit over-anxious and start forcing things a bit. That’s why it’s important we, you know, just chill out as well. Get that balance between training when we’re on, we’re really on – but when the work’s done we can put the feet up for a bit.”

While it will be good to be back at home after two away games, Ireland will be meeting a revitalised France after the pick-me-up of a bonus-point win.

“They’re coming off the back of a good win. Sometimes it’s hard to know what to expect. They’ve obviously got a huge pack and some guys in that back line that really are electric. I think we’ll expect them to really turn up. They like a drive and a good scrum too. It’s also a big set-piece battle for the forwards as well.”

Last year’s round one meeting was, of course, a rather memorable Six Nations debut for the young lock. “It was a great one to be involved in. The Stade de France is obviously an awesome one to play in. Good memories, hopefully we can finish in a similar fashion.”

Then he paused to think about what he’d just said and smiled broadly.

“Well, obviously not finish in a similar fashion.”