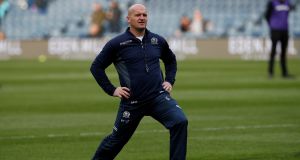 Scotland head coach Gregor Townsend has 14 players unavailable and has to convince the remainder that the All Blacks are beatable. Photograph: Craig Brough/Rueters

New Zealand defeats on European soil are not quite as rare as Scotland wins at Twickenham, but their scarcity highlights the mountainous task facing the hosts at Murrayfield on Saturday.

There have been a paltry four – two by France, two by England – in more than 50 Tests since 2000. And the All Blacks just do not lose to Scotland. In the 112 years since the first of their 30 encounters, the only Scottish crumbs of comfort have been two draws: 0-0 in 1964, the last Test match to finish pointless, and a 25-25 thriller in 1983, when Peter Dodds missed a touchline conversion following Jim Pollock’s late try to level the scores.

So do Scotland really have a hope of ripping up a well-worn script? Gregor Townsend is an articulate and intelligent coach who has already enjoyed one notable triumph over Australia in his time in charge, but delving into his own experience of facing down the All Black machine might be counter-productive.

Townsend never came close to beating New Zealand on the six occasions he faced them, from 1996 to 2001. He was part of Scotland sides that suffered some serious shellackings at Kiwi hands, including a record 69-20 defeat at Dunedin’s House of Pain in June 2000.

Townsend was at outside centre that day as the late Jonah Lomu ran in three of New Zealand’s 11 tries. Four years earlier, at the same Carisbrook ground, Townsend – playing at fly-half – scored one of Scotland’s three tries as they mustered 31 points, their highest tally against New Zealand. But that was only half the story. The All Blacks racked up 62, the electric Christian Cullen grabbing four tries.

Townsend’s admiration for the way New Zealand go about their business is obvious. “Their front five pass the ball more than any team in the world,” the Scotland head coach said.

“They pick a fullback [Damian McKenzie] who is only 5ft 8in but a wonderful player who proves you can be any size, and they play at a pace and tempo that really tests the boundaries of what you can do with a rugby ball.”

Townsend has unveiled a side with two injury-enforced changes, the prop Zander Fagerson coming in at tight-head and the South Africa-born Cornell du Preez handed a first Test start at No8.

On the other hand, he has 14 players unavailable and has to convince the remainder that the All Blacks are beatable. Maybe their fresh-faced optimism and relative lack of baggage against New Zealand will help.

Nine of the starting team – the backs Lee Jones, Huw Jones and Ali Price, the frontrow of Darryl Marfo, Stuart McInally and Fagerson, the lock Ben Toolis, the flanker Hamish Watson and the number eight Du Preez – will be facing the world champions for the first time, along with seven of the eight replacements.

Only the captain John Barclay, who made his debut in an embarrassing 40-0 Murrayfield drubbing in the 2007 World Cup, has cause to remember them with trepidation. But the burden of history does not appear to weigh heavily. “It’s just a stat,” insisted the flanker, whose move to Edinburgh next season was confirmed on Friday. “We have 80 minutes to try and change that record.”

The fullback Stuart Hogg, as you might expect, set the tone for the week. “We’re not going out to stand back, watch and admire the All Blacks, are we? They’re the best team in the world, so bring it on. We are more than capable of knocking them over. If you don’t believe that, you are in the wrong place.”

A succession of team-mates have taken up the baton. Toolis, whose Australian upbringing may provide additional motivation, said: “There’s always going to be areas you can find to exploit and do damage. Deep down there’s always that aggressive edge in wanting to beat them in anything.”

The centre Huw Jones said: “They’re a great side but we know we can trouble them if we get it right. We can score tries against anybody.”

It is certainly difficult to imagine a scenario where Scotland edge a tense gruntathon. Ireland showed in Chicago last year that to beat the All Blacks you have to be brave and score tries, apply pressure with an inventive kicking game, scramble like mad in defence and convert every chance you get. The risk is obvious, the reward a potential game-changer.

The high point of the Townsend era to date, that summer win over the Wallabies, offers a template for how Scotland may pull off an even more improbable victory.

“We played with good intent that day, with a lot of accuracy,” recalled Barclay. “We have to play with the same intent, be aggressive and try to impose ourselves.”

That victory in Sydney has taken on a higher value since Australia toppled their admittedly weakened rivals in Brisbane four weeks ago.

Scotland have not been afforded the same generosity. New Zealand have named their strongest side available, with Codie Taylor at hooker for the injured Dane Coles their only change.

Is that a sign the All Blacks are taking Scotland, ranked sixth in the world, seriously? Townsend’s men should take it as a compliment. If they believe their bullish words, history could be in the Edinburgh air. If not, the gap between the two sides is likely to remain as wide as the Forth.