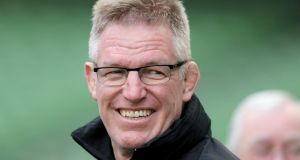 Fiji head coach John McKee during their Captain’s Run at the Aviva stadium ahead of Saturday’s Test match against Ireland. Photograph: Dan Sheridan/Inpho

The Samoa Rugby Union’s bankruptcy has caused shock waves through the sport this month, and Fiji head coach McKee is advocating for change.

“When you look at the regulations of the game, it’s almost as though they were formulated back in the amateurism days and I don’t think they’ve really moved on into the professional era for the tier two nations,” said McKee.

“If any of the tier one nations tour down south, they can get good gates, and it doesn’t happen for us.

“I understand the unions up here have costs as well, and they get a lot of their income out of these gates.

“But I think there needs to be some move there somewhere, where the host pays the visiting team some sort of an appearance fee.

“The stadium’s sold out here tomorrow, the Pacific teams are always a big draw card and the northern unions like playing them because the Pacific Islands teams are so entertaining.

“People will always come and watch Fiji because they know they will see exciting rugby.

“There’s no other team in the world that can unleash the kinds of unusual, off-the-cuff plays we can.

“You don’t want to coach that out of them, but you do have to balance that with a little bit of structure.”

The stunning dexterity of the Fijians is underscored no more finely than by Levani Botia, who plays in the backrow for La Rochelle in France’s unforgiving Top 14 but inside centre in Test action for McKee’s men.

The imposing midfielder will square up to Ulster powerhouse Stuart McCloskey in Dublin in a keenly-anticipated match-up.

McKee admitted Botia could shift into Fiji’s backrow in future, but for now is firmly a centre for the multi-talented tourists.

“Botia is a very interesting player, he’s always played 12 for us in the Flying Fijians but towards the end of last year and this season La Rochelle have been using him as a six,” said McKee.

“So I think he’s one of the most versatile international players around.

“He’s definitely a 12 for us for this tour, but towards 2019 who knows? He could perhaps transition into a backrower for us.”

1 ‘Your father works for my father’: Schools rugby turning toxic in the stands
2 Wexford best the weather and Kilkenny on a mad day to be hurling
3 Few, if any, have given as much to Munster as Garrett Fitzgerald
4 On healing and wild hurling: The re-education of Diarmuid Lyng
5 Winning Triple Crowns: ‘Seeing Jack Kyle was a spiritual experience’
Real news has value SUBSCRIBE