Pool A: Scotland to be feared if Russell and Hogg are at their best 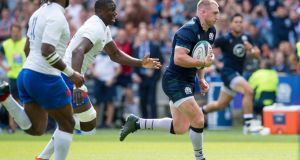 Scotland’s Stuart Hogg will be key to their hopes in Japan. Photograph: Ian Rutherford/PA

If there is one match to prove that Scotland are to be feared it came at the end of the 2019 Six Nations, when they produced one of the greatest comebacks of all time. Trailing 31-0 at Twickenham they eventually drew the final Championship match 38-38, playing a brand of rugby that will cause problems for any side. Gregor Townsend’s side have the ability to thrill with the ball in hand. Always willing to keep possession alive the likes of Finn Russell and Stuart Hogg are capable of unlocking any defence in the world - but they could sometimes be accused of profligacy. If they beat Ireland in the first match then the quarter-finals await, although the flying Scots perhaps lack a little power up front when facing the bigger teams. A resounding 32-3 defeat to France in Nice in August was worrying but they atoned a week later, beating Les Bleus 17-14 at Murrayfield.

Gregor Townsend is fiercely patriotic, relentless in his thirst for knowledge, and will draw down from disparate sources. He is meticulous and thorough in preparing his teams. And, yes, there is a script, a framework beneath the expansive playbook, the offloading and the high-octane tempo; it isn’t loosey-goosey but instead one built on more prosaic foundations.

An injury to John Barclay’s meant that scrumhalf Greig Laidlaw started the Six Nations as captain with the mantle eventually passing to hooker Stuart McInally, a combative, no nonsense player who started his rugby life as a flanker and has lost none of those qualities particularly at the breakdown. Townsend has kept faith in the Edinburgh frontrow, who retains the role for Japan.

It’s impossible to look past Stuart Hogg, the team’s attacking catalyst. When he is in his pomp, he’s so difficult to contain and can turn defence into attack in a nanosecond. His pace and footwork ensure that he is lethal in broken play and that teams who kick poorly will be punished. He creates space for other players. Occasionally caught out in defence but the ledger is overwhelmingly positive.

It’s not a good memory in a sense but it represents the furthest the Scots have got in the history tournament when they lost the 1991 semi-final 9-6 against England at Murrayfield. Fullback Gavin Hastings missed a relatively straightforward penalty and for much of the game the Scots were the better team. They lost the third and fourth place playoff to New Zealand.

They are due a bit of good fortune in a World Cup based on their controversial defeat to Australia in the quarter-final four years ago. They certainly have the wherewithal to make the quarter-finals but perhaps not the depth of quality in the squad if they were to pick up an injury or two. They need Finn Russell and Hogg to be at their best.