Gary Gold: Ireland ‘one of the sure favourites’ for World Cup 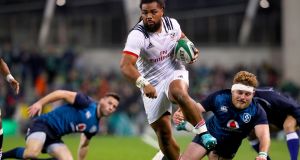 Joe Taufete’e gets away from Finlay Bealham the score the USA’s opening try. Photograph: Tommy Dickson/Inpho

USA coach Gary Gold piled the pressure on to Ireland by declaring that they are a good enough team to win the World Cup in Tokyo next year.

Speaking after his side were soundly beaten by Ireland 57-14, Gold paid tribute to Joe Schmidt, his coaching staff and the current depth of talent in the country.

“You actually sit back and admire it in many ways,” said Gold.

“It’s good to see. It’s good for the game. I’ve said it for a while now Ireland are certainly one of the sure favourites going into the World Cup.

“The challenge [for the US] is that there are not too many weaknesses [in Ireland]. They have a great set piece. They have a very good attacking game,” added Gold.

“You leave Johnny [Sexton] out and bring Joey [Carbery] in and even the guy on the bench is not a shabby 10. Their skill sets are extraordinary.

“We had five sets of play that went on for more than two minutes, one three minutes 20 seconds that’s a lot of rugby. Unfortunately at times we weren’t good enough to handle that pressure.”

Gold added that this was as good an Irish side as he had ever seen. Acknowledging that this was not the frontline Irish team made it even more impressive.

“I think they are as good as I have ever seen keeping in mind that this was a fully changed Irish line-up. the strength and depth in Irish rugby now is ridiculously healthy.

“For Joe [Schmidt] to rest 14 starting guys from last week, who haven’t even played in the combinations this week, is a massive credit to Joe’s coaching staff.”

A disappointed US team captain Blaine Scully felt that they could have made life more difficult for Ireland. A physical side, he believed they didn’t step up in areas where they have been traditionally strong. The US, currently ranked at 13 in the world, have beaten Scotland and Samoa in recent months.

“We feel we let ourselves down in a few areas where we pride ourselves,” said Scully.

“That’s just part of the learning curve. When we spilled possession, turned the ball over there was just a green wave washing over us.”

1 Ireland 23 Georgia 10: How the Irish players rated
2 Sordid murder of hurling brothers still resonates in south Galway
3 Ireland’s autumn of discontent continues with abysmal Georgia showing
4 Jim McGuinness: There is a way to save championship and make it competitive
5 Ireland grind their way to grisly win over Georgia
Real news has value SUBSCRIBE