Garry Ringrose keen to develop his mental edge on the pitch 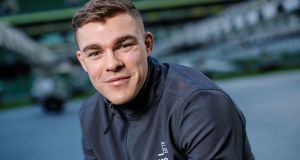 Garry Ringrose’s excellence as a footballer is easy to recognise on a pitch but it is his development in other facets of the sport that is less visible.

Six tries in five Heineken Champions Cup matches to date this season is the sharp end of the highlights reel but his general level of performance and the consistency of those displays this season have been equally impressive. Ten days out from his 25th birthday, he seems to have been around for ages, an impression fostered by the fact that he made his senior Ireland debut as a 21-year-old against Canada in 2016.

In those intervening years, he’s gone from being a slightly shy, introverted presence with the senior group to finding a voice at both Leinster and Ireland. Stuart Lancaster was a catalyst, so too Leo Cullen, Girvan Dempsey and Felipe Contepomi.

“When Stuart first came in, I was younger, three and a half years ago, and I was a little bit quieter around the place and an introvert. He encourages me and everyone else in the group to have a point of view coming into team meetings, where you’re not just a bystander,”said Ringrose, who was speaking in his role as an ambassador for PwC at the company’s announcement of a new four-year sponsorship deal for Ireland underage sides and programmes.

“When you have a room with 50 opinions or points of view you get to hear and compare what you thought [about a game] to what someone else did. He would be good for meeting everyone on an individual basis [too].”

Lancaster encouraged players to speak up if what they had to say would benefit the group. Ringrose said: “Leadership is something that he studies. He listens to other rugby coaches and coaches from other sports, trying to get better himself. He’s been really helpful for me in that regard.”

Ringrose is a keen advocate of working to develop mental strength and resilience as a buffer against the volatility of sport in terms of results and performance levels. “I think it is a massive part of my game and really important to work on the mental side of things.

“Obviously the physical would be important in terms of being in the best condition possible but ultimately the mental side of things determines the decisions that you make out on the pitch. That coupled with looking after yourself mentally in terms of mindfulness and being in the best headspace possible.”

It would have been an important coping mechanism when confronting the disappointment of 2019, both in the Six Nations and the Rugby World Cup. The two-day Ireland camp in December under head coach, Andy Farrell, was a meet and greet for the newish coaching team and some players who wouldn’t have been familiar with the environment; there was a little rugby thrown-in.

Ireland’s new backs’ coach Mike Catt spoke briefly to group. Ringrose said: “It’s always good hearing a different voice and a new set of eyes and opinions. It was just a small couple of things but looking forward to working with him and picking his brain a bit more.

“But in terms of the style of play, hopefully we can play a little bit more expansively. It’s a tricky one because the way that I look at it, you can have the best intentions to play expansively but wherever the space is, that’s where you attack.

“The players take ownership of that and work with the coaches to have the best tools to exploit that, whether it’s in the backfield with a strong kicking game or whether it’s running from deep and playing a wider expansive game. Depending on who you’re coming up against you have to pick the right tools.

“From a defence perspective, considering how we finished in the World Cup and conceding tries, it’s to lock up a few things and hopefully don’t concede tries in the same way we did against New Zealand; if we come up against an attack that potent, we’re better equipped to evolve and improve on that front.”

Ringrose also endorsed the candidacy of Johnny Sexton as the next Ireland captain, a couple of hours ahead of the formal announcement. “Yeah definitely, because as a supporter I watched him when I was younger, and I still consider myself lucky to play alongside him based on what he has achieved and what he’s going to keep doing.

“He’s been a brilliant captain at Leinster and there was no dispute at Leinster when Isa [Nacewa] left, who the next man for the job was; and he’s taken that over brilliantly.

“He’s obviously a quality player but [with his] competitive nature he brings the best out of people around him. Second best isn’t acceptable, which is the mindset you need to have, and he’s someone who drives that.”