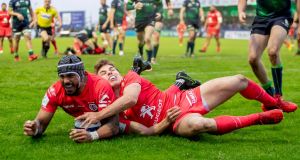 Connacht did all they could to keep their Champions Cup hopes alive, but it was never enough against the French champions who again showed their credentials in this season’s Champions Cup.

It was Toulouse’s power more than any flair that ensured they continued their runaway lead of Pool Five. Connacht simply failed to secure enough ball in the opening half, did not pose any real attacking threat until the final 20 minutes, and outside the scrum, they could not get the upper hand for any sustained period of time.

“We showed a lot of intent, our energy was good, but our execution was not good enough,” said Connacht coach Andy Friend.

So no fairytale result against the French champions, and no quarter-final, but Connacht now head to France for the final pool fixture against Montpellier desperately needing to stop the recent run of defeats.

Written off before the game, Connacht were always going to struggle against the French aristocrats, who produced a professional performance of strength and power, and survived two yellow and one red card. It will not worry them unduly that they failed to secure a fourth try bonus.

Connacht enjoyed a positive start with the wind in the first half, and opened the scoring in the 10th minute, capitalising on a series a penalties conceded by the French pack, which resulted in the first of the two yellow cards. The pack had the upper hand as they marched towards the line, Gavin Thornbury having secured the lineout before the pack drove to the line directed by Tom McCartney. But after the visitors again were penalised, referee Luke Pearce had no option but to award a penalty try for a 7-0 lead.

However, after that it was all Toulouse, and eventually they were rewarded. They tied the score in the 20th minute, taking advantage of a penalty after Bundee Aki was adjudged to have gone off his feet at the breakdown. As expected the French pack produced a series of drives for the line, and despite Connacht’s best defensive efforts, former All Black Jerome Kaino was given the try after referral to the TMO for a double movement.

There were plenty of anxious moments for Connacht thereafter as they struggled to get their hands on the ball. Lock Florian Verhaeghe could have scored after charging down a Carty clearance, but he fumbled the ball with the line abegging, while scrumhalf Stephen Kerins also had the ball knocked out of his hand trying to clear.

Connacht struggled with their exits and as a result found themselves camped on their own line defending a Toulouse scrum, but superb defensive work from Tienan O’Halloran prevented a fullback Ramos scoring, producing the perfect jackal to win the turnover and the immediate danger.

It was a real sucker blow for the French outfit as Connacht regained the initiative, helped by a spark of genius from Carty who toe-tapped Gaelic style to himself to maintain the momentum.

However, the stalemate was broken in the 39th minute - a turnover from Kaino on his own 10 metre line resulted in a try at the other end - hooker Julian Marchand touching down from a close-in maul to lead 7-14 at the break.

Toulouse started the second had as they did the first half, content to go to through the phases, and pounce when the opportunity arose. Within five mintues, an attempted clearance from Carty was charged down giving former Connacht player Pita Ahki the easiest of scores, with Ramos converting to extend Toulouse’s lead to 21-7.

Connacht kept their hopes alive - a delightful break from Carty provided Boyle with space, and the flanker burst his way through, but was tackled just shy of the line. Within minutes the home side was back attacking the French line, but Toulouse’s defence remained rock solid on a disappointing evening for the Irish side.

Lions to play Japan on home soil before tour to South Africa 09:26
Tiger Woods in the groove as he plots a path to Augusta 09:22
No underage or minor GAA to be allowed under Level 5 Covid-19 restrictions 08:53
Ole Gunnar Solskjaer hails players after win over PSG 07:57
Rashford gives Man United another win in Paris; Gordon D’Arcy on Finn Russell 07:34
Crossword Get access to over 6,000 interactive crosswords