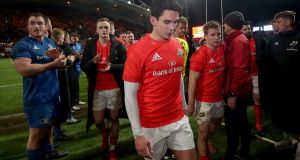 Joey Carbery will miss the Six Nations and could be out for four weeks. Photo: Bryan Keane/Inpho

Munster head coach Johan van Graan has confirmed that, as feared, initial expectations are that Joey Carbery will be sidelined for three to four months after undergoing surgery on the damaged wrist ligaments he sustained in the province’s 38-17 defeat by Ulster last Friday.

The 24-year-old will thus miss the entirety of the Six Nations, leaving Andy Farrell and the Irish coaching staff even more hopeful that Johnny Sexton will recover from his knee operation in time for the opening game against Scotland in three weeks.

It was Carbery’s first start for Munster this season due to the ankle injury which had plagued him since Ireland’s first World Cup warm-up match, and just his fourth for province or country since last January after the hamstring issues which affected him last season.

“That’s rugby, I’m gutted for Joey as an individual,” said van Graan at the squad’s High Performance Centre in the University in Limerick after training today. “I care about the players and speaking to him on Monday afternoon when we got the news, obviously it’s not nice news for him. He worked hard to get back into the position, he played the full 80 for the first time for quite a while and now he is out for a considerable amount of time.

“That’s rugby, that’s life. He’ll be back, he’s a class man and a brilliant rugby player. He’ll come back stronger, take his time and I can’t wait to have him back in the future.”

With Tyler Bleyendaal also sidelined indefinitely with neck problems, it leaves Munster desperately hoping that JJ Hanrahan will recover from the hamstring injury which sidelined him for Munster’s trek to Belfast in time for Sunday’s make-or-break Heineken Champions Cup game against Racing in Paris.

However, van Graan did not sound especially optimistic.

“We just trained out there, he did a bit of the team training and the true test will be on Friday, but we’ll test him on Friday and if he comes through he’ll play on the weekend. I won’t risk him if the medical team says he’s not 100 per cent right. If he does, hopefully he does. If he doesn’t, we’re going to back Ben and Rory. We’ll make a decision on the two of them, we’ve backed our squad the whole way.

“Hopefully he makes it, but if he doesn’t then we’ve been in this position before and we back the next man in.”

That would be either 20-year-old Academy outhalf Ben Healy, who has played one senior game in the defeat by Edinburgh in Cork at the end of November, or inside centre Rory Scannell.

“I’d say 50/50 is a good way to put it,” said van Graan in rating Hanrahan’s chances of being fit to face Racing. “Importantly, he wants to be ready. He is an experienced No 10, he knows the team needs him for possibly 80 minutes so he needs to be at 100 per cent to perform.

“We’ve been in this position quite a bit, we’ve literally had one fly-half and when we’ve had 6/2 split (on the bench) Rory was covering in any case. It’s not something new for the team. We’ll just back whoever is in that position on Sunday.”

In any event, Munster will not be looking to bring in re-enforcements at out-half.

“No, not at all. We’ll back Ben and Jake Flannery (another 20-year-old Academy outhalf who has not been registered for Europe) who hasn’t been mentioned at all. He’s been out injured since the Under-20 World Cup, but he can play 10 and 15 and did a bit of training last week, he’s doing in full training this week.

“You’ve got to back your young guys, that’s two potential guys for the future and if we can get them opportunities on the pitch we will. That’s someone I’m certainly excited about, Jake.”

Furthermore, Munster are also assessing winger Andrew Conway and full-back Mike Haley who, as with Hanrahan, are in a race against time to be fit for the Racing game.

“Andrew did a bit of team training today, we’ll make a call on him on Friday, Mikey, we’ll take it day by day as well, I believe he’ll be ready for Sunday but we’ll make all of these decisions on Friday.

“The way the draw worked out, we played on a Friday and we’ve a nine day turnaround, so that extra two days does help.

“We’ve got a squad, whoever is selected on Friday will go to Paris and will go with real intent and excitement against a quality side in Europe. For this season, in Europe, it’s our biggest game yet.”