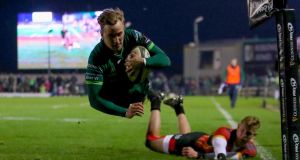 In this first of the back-to-back pre-Christmas Champions Cup fixtures, already there is much at stake for Sunday’s protagonists Gloucester and Connacht.

A win for Andy Friend’s side – a first in Kingsholm – would ensure they go into the return home fixture with the advantage of two wins from three in Pool Five; defeat for Gloucester is likely to spell the end of their European hopes this season.

The West Country club is going through a challenging period, with nine defeats from 11 fixtures. The current run of five successive losses, includes their two opening European games giants Toulouse and Montpellier, and coach Johan Ackermann will view Sunday as a real opportunity to stop the rot, particularly having never lost to the Irish province.

Those previous meetings have all gone the way of Sunday’s hosts. Four times in Europe and a play-off for Heineken Cup qualification has seen Gloucester prevail on every occasion. Some have been heartbreaking defeats for Connacht – it was 23-19 when they met in Kingsholm eight years ago, Johnny May scoring the winning try four minutes from time, while the 2015 play-off went to extra time.

Having led 17-15 at the break, Connacht eventually lost 40-32 – a controversial penalty from French referee Romain Poite proved the turning point. However, when the two last met in the Challenge Cup quarter-finals in 2018, the English premiership side were comfortable 33-18 winners.

Both sides have several players on duty tomorrow in Kingsholm who lined in that last Sportsground duel. Notable is Friend’s selected frontrow of Denis Buckley, Tom McCartney and Finlay Bealham – although Paddy McAllister, had he been fit, would have revelled in a return to his former club.

Jarrad Butler, who returns from injury to captain the side, and Quinn Roux will also be familiar with Gloucester’s wily ways up front. Eoghan Masterson, on the bench on that occasion, joins Butler and Colby Faianga’a in a mobile backrow, while Bundee Aki, Jack Carty, and Niyi Adeolokun are the trio of backs who last lined out against the Cherry and White at the College Road venue.

A late change sees John Porch, double try scorer against Southern Kings last weekend, make his first start at fullback. He takes over the number 15 shirt for the first time due to the late withdrawal of Matt Healy, who took a knock in training. Kyle Godwin, in the centre last weekend, moves to the left wing, with Peter Robb partnering Aki in midfield.

Although missing some key players, including captain and World Cup winner, Willie Heinz, Gloucester still boast some six internationals in their starting line-up, including the in-form halfback pairing of Danny Cipriani and Joe Simpson, and another three on the bench.

Friend believes Gloucester will be more dangerous than ever given their recent run of poor form.

“They will be the wounded animal without a doubt, and for us, let them be that. We know what we can do, and we will be doing everything in our power to contain them, and put them under more pressure,” he says.

“When you are the team looking for that win, you keep pushing hard to get it, so we all we can do is focus on this weekend. These back-to-back fixtures are always critical, they are defining in terms of deciding our Champions Cup season.”

History is not on Connacht’s side in theses duels, but they certainly owe Gloucester one at this stage. The pressure is all on the hosts, and Friend’s side is in a strong position to capitalise.

1 Golf in Level 5 Covid restrictions: Clubs still waiting to hear if they can remain open
2 Gordon D’Arcy: Ireland don’t need to do a Finn Russell on it
3 Hugo Keenan could start in changed Ireland team against Italy
4 No underage or minor GAA to be allowed under Level 5 Covid-19 restrictions
5 Ole Gunnar Solskjaer hails players after win over PSG
Real news has value SUBSCRIBE

No underage or minor GAA to be allowed under Level 5 Covid-19 restrictions 08:28
Ole Gunnar Solskjaer hails players after win over PSG 07:57
Rashford gives Man United another win in Paris; Gordon D’Arcy on Finn Russell 07:34
Seán Moran: Let’s leave the confusion aside and enjoy this All-Ireland 06:30
Gordon D’Arcy: Ireland don’t need to do a Finn Russell on it 06:00
Crossword Get access to over 6,000 interactive crosswords