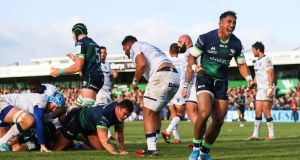 A timely return for Irish centre Bundee Aki, who has signed a new contract extension with the IRFU on Friday, which will keep him in Connacht for three more years.

Aki, who has earned 23 Irish caps, has now committed to Connacht and Ireland for a third time with the latest agreement inked keeping him here until he is 32-years-old.

Aki is named at inside centre having missed out with Connacht in last week’s Heineken Champions Cup defeat to Toulouse. He will provide strength and international nous in the Connacht middle.

There’s also a return from injury for Niyi Adeolokun who adds his speed to an already pacy back three with John Porch on the opposite wing and Matt Healy at full-back as Connacht hope to improve on their fourth-place standing in Conference B.

Denis Buckley has also returned after a bout of illness with Andy Friend picking a new frontrow with tighthead Finlay Bealham and hooker Tom McCartney. Connacht opt for a strong set of locks in Ultan Dillane and Quinn Roux, who captains the side as Jarrad Butler is on the bench.

The Kings have not played a match for the two weeks of European Champions Cup with Friend concerned their entire focus will have fallen on this game. The South African side could do with a change of fortune with just one win from six and bottom of the conference table.

“We were very disappointed not to come away with anything from France last week, so this is a good opportunity for the squad to bounce back. Bundee Aki, Niyi Adeolokun and Jarrad Butler are all back in the squad so we’re improving on the injury front,” said Friend.

Yaw Penxe, who sustained a hamstring injury in the opening game, will make his second appearance and one of three changes to the team that won 14-16 against the Ospreys in Wales, the Kings last outing three weeks ago.

But Connacht are also looking forward to their back-to-back Champions Cup games against Gloucester, the first of those away in Kingsholm next Sunday. The outcome of those could define their European season in a positive or negative way. That alone should provide enough of a strong binding force in Galway.

1 Few, if any, have given as much to Munster as Garrett Fitzgerald
2 On healing and wild hurling: The re-education of Diarmuid Lyng
3 Triple bogey costs Rory McIlroy as Adam Scott prevails at Riviera
4 Solskjaer unable to say if Paul Pogba will play for Manchester United again
5 Keith Earls far from ready to abandon centre stage
Real news has value SUBSCRIBE

Ireland backrow of O’Mahony, Van der Flier and Stander to be retained against England 01:00
Ciaran Clark a doubt for Euro 2020 playoff after suffering ‘serious’ injury 01:00
Triple bogey costs Rory McIlroy as Adam Scott prevails at Riviera 23:39
Solskjaer unable to say if Paul Pogba will play for Manchester United again 22:30
Moloney on song as Tipperary prove too strong for Westmeath 20:45
Here is your handy guide to sport on television this week