‘Selection is a matter of opinion at end of the day. That’s what makes it interesting’ 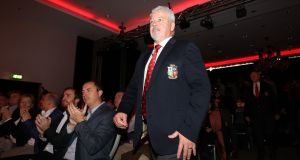 In Johnny Sexton, Owen Farrell and Dan Biggar, aside from all their kicking, passing, running and tackling qualities, the Lions coaches have picked three uber competitive, narky figures who will all strive to be the first-choice out-halves come the test series.

Clearly, their defending in that 10 channel is also critical, for they all enjoy the physicality of tackling. Both the head coach Warren Gatland and backs coach Rob Howley made it clear that Farrell was travelling out first and foremost as an outhalf, although it would be no surprise were he and Sexton ultimately both accommodated, with Farrell reprising his role for England at inside centre.

Looking ahead to working with Sexton again, Gatland said: “There’s no doubt Johnny has got some leadership. The great thing about those three 10s is they all think they’re better than each other. That’s the biggest thing in the squad.”

“It’s pleasing to see Johnny get a few games under his belt. He was pretty battered and bruised after the Wales-Ireland game, so for him to front up the next week against England and play so well was really positive from my point of view.

“There’s no doubt he’s going to be targeted. I think 10s are. One of the things about our 10s is that all of them are strong defenders and that’s going to be paramount in that channel, having players who can get off the line.

“That’s a strength of Owen Farrell, I think he’s going to have leadership in that role, where that’s at 10 and we know he’s capable of playing at 12 if we want him to do that. Defensively, we’re going to have to be strong in that area. We’ve been pleased with Johnny and hopefully he stays fit over the next six weeks.”

As for Gatland’s anticipated choice of Sam Warburton as captain, Gatland said: “I rang Sam last Thursday, first to ask him about his injury and secondly asked him how he would feel about being asked to captain the Lions. I wanted to see what his response was and he said, ‘Outstanding, I’d love it, it would be awesome.’ That was enough for me.

“One of the things I admire about Sam, not just as a player, but him as a person is that it’s not about Sam Warburton, it’s about the team and putting the team first. He’d be under no doubt that his form has to be good enough to be selected in the Test series.”

“If Justin Tipuric or Sean O’Brien are playing better than him in the seven position and we make that selection decision from a coaches’ point of view, he’ll understand that and respect it. He’ll put the team first and that’s what I admire about him as a person and an individual.

“His rapport and relationship with referees is very good, so that was one of the factors also. You’ve got to have a seven in the Southern Hemisphere who can compete over the ball and compete with their ability at the breakdown. The feedback that’s come back is that they see him being as good as McCaw or Pocock at the breakdown. He’s got some real attributes as a player and a leader, but the biggest compliment is what a good person is.”

“I think it might be easier for him to captain the Lions than captain Wales. He’s under a huge amount of expectation, scrutiny and pressure as Welsh captain, but here he will find it easier with the quality of players and quality of squad around him, the other leaders in the team are hopefully going to make his job pretty seamless and pretty easy. We’ll need other leaders to captain when he’s not playing and support him in his role.”

Gatland also deflected questions regarding any perceived Welsh bias in choosing a dozen of their number.

“We didn’t go through the numbers. I didn’t realise the split. What we did was put together a group of players in each position that we felt could be in contention. Then we went through and selected players in each of those positions.

“We had a long and lively debate about hookers and Dylan Hartley has done a great job for England in terms of competitiveness and leadership. But then if we had picked Dylan, I’m sure that if we’d left out Jamie George, Rory Besty or Ken Owens, we’d be asked about that - they were arguably the form players in the Six Nations.

“Four years ago we left our Rory Best and there was uproar in Ireland in terms of how unlucky he was. Dylan has been unlucky, but it’s not just those positions. There’s lots of talk about Joe Launchbury, Donnacha Ryan, the two Gray brothers, in terms of being left out.

“Selection is just a matter of opinion at the end of the day. We might disagree but that’s what makes it interesting.”

1 Getting behind the rotten core of rugby with Dan Tuohy
2 Irish squad in the dark as clouds hang over Six Nations
3 Football fan survey: Manchester United still top the league among Irish fans
4 Football fan survey: Almost half of Irish adults say they support a club
5 Matt Williams: Like on my Ryanair flight, Ireland were suffocated by England
Real news has value SUBSCRIBE

Irish squad in the dark as clouds hang over Six Nations 06:00
Weekend hurling previews 06:00
Three Munster Academy players selected for Pro14 clash with Scarlets 06:00
Friend warns Connacht need to be at their best in must-win Southern Kings clash 06:00
Getting behind the rotten core of rugby with Dan Tuohy 06:00
Here is your handy guide to sport on television this week