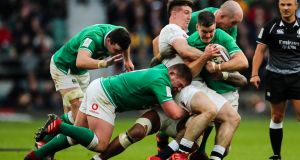 Leinster backs’ coach Felipe Contepomi doesn’t attach any currency to suggestions that Ireland’s physical discomfort against England at Twickenham in performance terms might prove a harbinger of what could potentially materialise when the province take on the defending champions Saracens in a Heineken Champions Cup quarter-final in April, on foot of a number of players being common to club and country.

He explained: “You can definitely learn from those games, but England and Ireland are not Leinster and Saracens. I know what you mean, we have many players [from] both sides, playing for their countries, but it’s still a different game, scenario and situation. We can learn a lot from the game, but it will be a different game.

“You can always learn from your own games and from watching other teams. Definitely, we have some personnel in both teams that play for Leinster and Saracens and they have their own learning experiences as well [from the weekend].”

Contepomi didn’t subscribe to the notion that Ireland can’t match England’s physicality or that it was at the centre of Leinster’s defeat to Saracens in last season’s European final.

“I can’t see James Ryan not being physical. I thought he was really physical. Ronan Kelleher, Caelan Doris when he came in, they were both very physical.

“On the other side, you see [Maro] Itoje, [George] Kruis and some others are very physical, but I think every game is different and it comes also on how you prepare the game, how you start the game, how you’re set up for those games. Then I can’t see why the Irish players can’t be as physical as the English. I think they are.

“It’s about preparing a game plan, game management and there are loads of things to consider, not only the physicality. They’re [Saracens] not the same. They’re not the same players. Like England started the first three movements with [Manu] Tuilagi [and he doesn’t play for Saracens]. It is very easy to narrow it down to Ireland and England, Leinster and Saracens. When your national team plays in a certain way sometimes, and they are successful, you follow certain traits.

“I wouldn’t be convinced on the [last season’s European] final [that we were physically deficient]. The last 20 minutes we were beaten. We were 10 points ahead three minutes before half-time and then in the second half we started strong and couldn’t score. That’s the game, it’s not as though we’re completely blown out of the game. Then when you chase the game against the Sarries defence, it’s hard.”

Contepomi has no concerns about how Johnny Sexton will recover from a tough afternoon for the Ireland captain, pointing to the manner in which he has recovered from the odd performance hiccup in the past or his capacity to rediscover the enduring excellence that has been the hallmark of his career to date.

He said: “We’ve been here talking more about Johnny’s good days than bad days. Sometimes you have a bad day. It is more important how he bounces back. He is such a competitor. He has shown at least from when I saw him after the World Cup, in the time he has been with us, he is in a good place mentally and physically. He’ll bounce back. I wouldn’t be worried about Johnny.

“How many times has Johnny kicked to win games? I wouldn’t be worried about that. He has a lot of time to get it right. It is not that he has been kicking badly for the last six months. It is only one game. It can happen.”

There was some good news from a Leinster and Ireland perspective with regard to the latest medical bulletin. Jack Conan has returned to full on-field training for the first time as he steps up his rehabilitation from a broken foot sustained prior to the Japan game during last year’s Rugby World Cup. The initial prognosis was six months but he is currently ahead of that schedule.

Assuming no reaction from the injury, the number eight should make Leinster’s two-match trip to South Africa next month when the provinces take on the Southern Kings and the Cheetahs. Contepomi explained: “We go step by step; it’s great to have him on the field training. That’s the first step and for him it’s great after the injury he had.

“It will depend on the assessment of doctors and physios. But hopefully, his comeback will be sooner rather than later. We have this game [against the Glasgow Warriors at the RDS on Friday night], then a week off, then a rugby week and then a trip to South Africa

“I’d say if he can train, we hope that he can be fit and available for selection. But we can’t be sure, it’s step by step. When you come back from injuries and long-standing injuries, sometimes a setback will put you, one step and two backwards.”

Rory O’Loughlin (shoulder) also returns to the pitch this week but Conor O’Brien, who picked up a hamstring injury in the win over the Ospreys last Friday, will require further medical assessment.