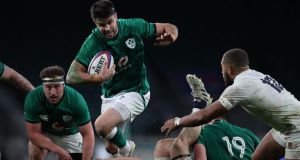 Whatever the verdict of viewers at home on Ireland’s performance at Twickenham last Saturday, compared to the last two visits anyway those within the losing away dressingroom made the trek home beaten but relatively unbowed.

Conor Murray is one of those who was an integral part of the 2018 win at Twickenham and has now been on the losing side on each of the four meetings since then. But he maintained this was a step up.

“They might have scored points, definitely, in the first-half but if we had taken one or two of our opportunities - we did the hard work and to within five metres out or whatever - then the game is up in the air as to who gets the win.

“So in terms of that alone there’s belief and then in terms of the general feeling leaving Twickenham this time, having not taken a couple of opportunities and having given away a couple of easy scores if you will, then there’s huge belief.

“And that’s without going into the feeling in the squad. There’s an unbelievable atmosphere in terms of growth and mindset and things like that, and the excitement of youth and experience. I think lads in the dressingroom will be dying to get another chance at this England team. They’re a really good side and there’s a lot of respect there but I think we’ll be really eager to play them again.”

This was Murray’s 90th Test match, if only the ninth from the vantage point of the bench initially, so he’s no mug. Asked what specifically Ireland did better than on the previous two visits here, he put aside his own disappointment at not starting when saying: “I thought we were smarter.

“There have been times before, let’s say the last two times we’ve come here, and we’ve known what’s going to come our way in terms of line speed, in terms of the volume of their players and things like that, and their kicking game. I thought we dealt with it a lot better and I think we just boxed a little bit more clever.

“Definitely at times we still ran down alleys we shouldn’t and kind of played into their hands, into that line speed and that volume. I always have to watch the match back but my feeling straight away afterwards is we definitely dealt with a little bit better.

“In terms of the gap between the two sides, I don’t know who’s watching it because the first-half they’re proper scoring opportunities and we just didn’t take them, whether that be five, seven, or 12/14 points, it would have a completely different outlook at the time even and then towards the end of the game we were growing again.

“Maybe I’m biased or just protecting my teammates but I thought it was a lot better than we have done here.”

The experienced Irish scrumhalf seemed genuinely surprised and even a little aggrieved at hearing the view there was a good amount of distance between the two sides.

“I don’t know who said there’s a bit of distance. I think if you look at the first half, the three opportunities we had in their 22, deep in their 22, 10 metres out, that’s what disappointed us. We did really well, especially in the first 10 minutes, applying a lot of pressure on them.

“We know that’s the game they play, they like to put you under a lot of pressure, feel like you have to force things and we did that really well in the first-half and presented ourselves with opportunities. For whatever reason, errors or set-piece not going quite to plan in those three instances, it could have been a different story if we had taken one of those chances and converted them. It would have painted a much different picture. I felt we did really well at times. The pressure game they play, I thought we knew that was coming and dealt with it a bit.

“At times they get off the line and did what they’re looking to do, put you under pressure with their two-man tackles and stuff and that’s a bit of a learning but definitely better than the last time we were here.”

Remaining defiant, Murray maintained: “I wouldn’t say we gifted them tries because certainly Jonny May’s finish was a really good finish. He’s a really good player and sometimes that happens.

“But in general maybe they didn’t have to work as hard for their scores as we did for our opportunities. Yeah, watching on in the first-half and then coming on we felt a lot better than we have been at Twickenham before. I think we’ll continue to grow as a group and make a lot of learnings from this game for sure.”