Versatile Leinster stalwart has been denied opportunities others have been granted 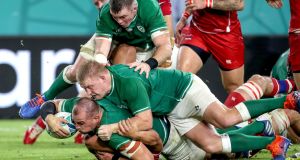 Rhys Ruddock scores a try for Ireland in the World Cup against Russia at Kobe City, Japan. That match against Russia was his first, and thus far only, competitive start. Photograph: Dan Sheridan/Inpho

Back in the summer of 2010, a 19-year-old with a prodigious build and talent was rerouted from the IRB Under-20 World Championship in Argentina, where he had captained Ireland in their opening two games against France and England, to join the full Irish squad on their New Zealand and Australia tour.

Having only played three games for Leinster at that juncture, he started in the non-cap 31-28 defeat by the New Zealand Maori in Rotorua and a week later made his Test debut in the 22-15 defeat by Australia at Suncorp Stadium.

A decade on and the mystery is how Rhys Ruddock has started only a dozen Tests in the intervening period.

Watching him tearing it up for Leinster in recent weeks, at both ‘6’ and ‘8’, something equally puzzling given Jack Conan’s latest mishap has left Ireland with just five fit backrowers, is that now, on the eve of his 30th birthday this Friday, Ruddock is not even in the current 34-man Irish squad.

For the last year or so he’s arguably been in the form of his life. He’s never looked fitter or quicker, and under the training ground influence of Stuart Lancaster, has added a change of direction to his powerful running game. As one former Irish backrower puts it: “I don’t know why Rhys Ruddock is not in the Ireland squad. Madness in my opinion. A big, physical brute.”

It was a question this writer felt compelled to ask Andy Farrell last week.

“Regarding Rhys,” said the Irish head coach, “we think Rhys is a great player. He’s a physical specimen. He’s coming back actually trying to find some form, playing away at Leinster, but we feel like we’ve got some good backrowers in here as well.

“Jack Conan has just got a slight neck injury that might take a week or two; we don’t know how that’s going to unfold. But Jack is certainly in the frame and we know Tadhg [Beirne] can play in the back row as well.”

Naturally, coaches are reluctant to express publicly any failings they may see in players but, to be honest, we’re still none the wiser as to the reasons why Ruddock has again been excluded. It’s as if he’s become pigeon-holed as a B team captain, for both Leinster and Ireland.

Although Ruddock would become Leinster’s youngest ever captain in a game against Aironi in the 2010-11 season, it would be almost four years on from that debut in Brisbane before he appeared in an Irish jersey again, when a replacement in the Six Nations win over Italy in March 2014.

After playing in one of the two Tests on the tour to Argentina in 2014, Ruddock appeared to have made his big breakthrough in the autumn of 2014 when his then roommate Chris Henry was taken ill on the morning of the match against South Africa.

Ruddock was pressed into service as a direct replacement at openside – which underlines his versatility – and scored a try in a Man of the Match display as Ireland won 29-15. He looks a particularly useful option against the physical likes of England and South Africa.

For sure, rotten luck with injuries as well as the uber-competitive nature of Ireland’s backrow options has been a contributory factor.

He looked sure for a more extended stay in the senior squad but missed the 2015 Six Nations after fracturing his arm during Leinster’s European Champions Cup win against Harlequins the preceding December. Joe Schmidt said Ruddock would have been in his initial 2015 World Cup training squad but for then breaking his right arm for the second time in six months when captaining Emerging Ireland against Uruguay.

In the event, Ruddock was called up as a late replacement for Peter O’Mahony and actually played the last 10 minutes of the quarter-final defeat by Argentina.

Ruddock has, it’s true, played 26 Tests all told, and did feature in all three Tests on the summer tour to South Africa in 2016, when starting the second game in Johannesburg. But the only time he has started three Tests in a row was on the 2017 summer tour to the USA and Japan, when captaining Ireland to three wins.

Indeed, he has regularly been the go-to captain for odysseys such as that or the home leg of a Guinness Series against Tier 2 countries, so much so that he has captained Ireland to seven wins in seven matches.

Since that Johannesburg Test, Ruddock’s Test starts have been against the USA, Japan (twice), Fiji, Italy, the USA again, Italy again in a World Cup warm-up match, and Russia in Ireland’s third pool match in Kobe.

That night Ruddock carried the most metres (48) of any Irish forward, from 11 carries, beat the most defenders (three) and was the team’s leading tackler with 13.

Ruddock did, admittedly, also appear off the bench in the defeats by Japan and, in the quarter-final, by New Zealand, and was among the 45-man training squad Farrell and the coaches assembled for a pre-Six Nations, two-day training camp last December. But Ruddock missed out on the 35-man squad itself, with Max Deegan, Caelan Doris, Jack O’Donoghue, Peter O’Mahony, CJ Stander and Josh van der Flier all named ahead of him.

Consider this. That match against Russia in Kobe was Ruddock’s first, and thus far only, competitive start. He was a regular in Ireland’s matchday squad in the 2016 Six Nations, playing in four games as a replacement but has never started a game in the Six Nations, instead being restricted to five appearances off the bench in total. Not one Six Nations start in a decade?

He never seems to grumble, but it can hardly be said he’s been given his chance.