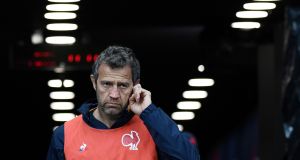 France head coach Fabien Galthie is not happy with comments made about his team’s scrum. Photograph: Getty Images

France coach Fabien Galthie described Wales prop Wyn Jones’s allegations that Les Bleus would cheat at the scrum in their Six Nations clash on Saturday as a lack of respect towards his country.

Jones said he hoped France would not get away with bending the rules at the scrum.

“It’s a lack of respect towards our scrum, towards our team, towards French rugby, towards our nation,” Galthie told reporters after naming his team on Thursday for the game in Cardiff.

“In the first two matches, their scrum collapsed 13 times and was penalised six times. We were penalised four times,” the former France captain added.

France manager Raphael Ibanez backed his coach, saying his players had been working closely with referees to abide by the scrum regulations.

“It was a blatant, childish attack,” he told reporters. “Our reference person is the referee, not a rival team’s coach or player.”

Ibanez also criticised the way Wales were handling outhalf Dan Biggar, who has been named in the team after suffering his third head injury of the season.

“We could also question the fate of their flyhalf who has been knocked out several times since the World Cup but has been going through (concussion) protocol after protocol managed by the Welsh federation,” the former France hooker said.

“We hope it’s been as efficient as possible in the interest of the player’s health.”

The last game between the teams was won 20-19 by Wales in last year’s World Cup quarter-finals and Les Bleus have not prevailed in Cardiff since 2010.

“The World Cup is behind us, it’s in the past,” said Galthie, who named centre Gael Fickou on the wing for the game.

Fickou, the most capped player in a rejuvenated French squad, is covering for the absences of Damian Penaud, who has not recovered from a calf injury, and Vincent Rattez who broke his fibula in the 35-22 win over Italy.

France lead the table with nine points ahead of Ireland after beating the Azzurri and England.

Wales head coach Wayne Pivac has called Gareth Davies and Ross Moriarty into the starting line-up in the only two changes from the side beaten by Ireland 12 days ago.

Scrumhalf Davies replaces Tomos Williams, and Moriarty takes over from flanker Aaron Wainwright, packing down in the backrow alongside Justin Tipuric and Taulupe Faletau.

Wing Josh Adams and Biggar are both deemed fit to face Les Bleus and both start.