Change in the weather could be the boost Ireland need 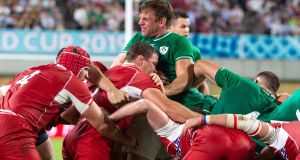 Jordi Murphy gets crushed in a scrum in the Rugby World Cup Pool A game between Ireland and Russia in Kobe Misaki Stadium on Thursday. Photoraph: Jayne Russell

As it transpired, Ireland were probably grateful to be sheltered from the rain in the Kobe Stadium on Thursday, and the exuberant Irish supporters assuredly were. They’re also a long way from Lorenzo, and the storm which hit Fukuoka is expected to have moved on by the time of their scheduled arrival on Friday, but new dark clouds are gathering.

Uppermost amongst these is the rib injury which Jordi Murphy suffered in the 35-0 win over Russia. “He may have popped a rib there, so we’re going to get him checked out,” said the Irish head coach Joe Schmidt. “He was pretty uncomfortable and that was disappointing because our plan was only to play him for 40 minutes and keep CJ [Stander] fresh for 40 minutes as well. We’ll see what that comes back like.”

Murphy caught a cheap shot on the side of a maul and, after receiving treatment in the 22nd minute, had to be replaced in the 27th minute. While injections could possibly ease the pain, a damaged rib cartilage can take up to six weeks to settle.

If Murphy is ruled out, the Irish management could opt to call up Devin Toner and henceforth employ Tadhg Beirne as a backrower, but they look like the only two options given it’s unlikely anyone who did not take part in the pre-season camps and warm-up matches would be considered.

Schmidt also maintained Joey Carbery was “good” after being ruled out before kick-off with a sore ankle following Wednesday’s captain’s run. Given he underwent ankle surgery following the opening warm-up win over Italy, that’s a concern, especially in the light of the initial prognosis on Jack Conan.

Most reassuringly of all, despite icing his troublesome quad, Johnny Sexton said it was always the plan to be restricted to 40 minutes.

Although this wasn’t the kind of win they were looking for, the squad at least have time to draw breath and regroup now. A change is as good as a rest? The squad have a change in venue and maybe a change in the weather.

“I think we are adjusting to the conditions,” said Schmidt. “I have heard that it does start to cool off in October. It’s October now so I’m hopeful the conditions will start to change a little bit now and we won’t have to adjust as much to them. So we’ll find out in nine days’ time.

“I spent a fair bit of time in my younger years in Samoa and they get very high humidity there, so they may well be a little bit better at adjusting in nine days’ time unless we get a little bit of a drop in the temperature.”

On foot of their relocation to Fukuoka on Friday, where Ireland will seek the win over Samoa on Saturday week, which will secure safe passage to the quarter-finals, Schmidt was also grateful to be resuming something akin to a normal match routine, with a seven or eight-day turnaround before a prospective quarter-final against, most likely, the All Blacks or Springboks.

“I think we have been stung a little bit in recent times with a couple of six-day turnarounds that we probably haven’t made the best job of.”

“Getting down to Fukuoka tomorrow will be a positive for us. We’ll give the lads a weekend off and then we’ll get into our normal work week and see what we can do next Saturday.”

The lads look like they could benefit from a weekend off.