Ireland began to put their World Cup back on track after their shock loss to Japan but it took over an hour to secure a bonus point in an unconvincing 35-0 win over a stubborn Russia. Video: Reuters 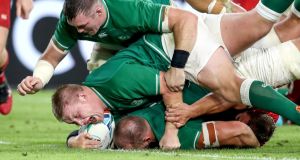 Ireland achieved their primary target of a bonus point win, and the huge army of Irish fans gave the players a rousing rendition when it was all over. But the quiet longueurs in between, mostly during a scoreless 35 minute wait for the fourth try, said as much about this performance, which was not quite what Ireland were looking forward.

The bonus point was at least secured shortly past the hour, which leaves Ireland requiring only a win of any kind over Samoa in nine days’ time to secure safe passage to the quarter-finals.

However Joe Schmidt had ventured that he’d like to see Ireland with the foundations of a 12-3 lead ala Japan, and if so this time build on it rather than become hesitant and anxious.

Well, they were 14-0 up in 14 minutes, and 21-0 up by the 35th, but in truth they failed to build on this strong start as he’d have wanted. Alas too, there’s a pattern here which pre-dates this tournament, but which has been repeated in all three matches.

No doubt the ball was again moist under the enclosed roof, and there were quite a few slips, as Ireland made 18 handling errors, thus failing to generate the kind of momentum they desired, be it in this game or in the group.

On the plus side, man of the match Rhys Ruddock had a big game, making 48 metres off 11 carries, while Tadhg Beirne and, off the bench, CJ Stander carried a fair amount of slack.

Indeed, curiously quite a few players look sharp and on top of the game, not least Garry Ringrose and the outside three of Keith Earls, Kearney and Andrew Conway.

But coming up against a side keen to compete at the breakdown, at times Irish carriers were again a little too static when coming onto the ball. The recycles were at times somewhat slow and ponderous, but these things are, of course, interconnected.

The Russians were hugely committed, and once again tackled all night, with their openside Tagir Gadzhiev again impressive in his strength over the ball.

Johnny Sexton only lasted a half, being replaced at half-time by Jack Carty, and perhaps it was no coincidence that this was Ireland’s better half, although far from perfect.

Sexton had shown a relish for contact, both in the tackle and in securing ruck ball, kicked his three conversions, never looked in discomfort, wasn’t treated once and generally seemed fine physically. But after he was again applying ice to his right thigh.

Furthermore, Rob Kearney walked off gingerly before the hour mark when replaced by Larmour, which meant Garry Ringrose had to go a full 80 for the third time running.

But potentially the biggest disappointment of the outing was the sight of Jordi Murphy being treated for what seemed like a rib injury at the end of the first quarter. He struggled on, but was removed in the 27th minute.

Having already lost Jack Conan in this tournament, on top of Dan Leavy and Seán O’Brien this year, the backrow cupboard is already looking a tad bare. The only other backrower in the original 45-man training squad was Tommy O’Donnell.

Schmidt had also wanted to see Joey Carbery have a run at scrumhalf at the end of the game, but ultimately he was ruled out with what the coach described as “a bit of ankle soreness after the Captain’s Run.”

He added: “We also had Conor Murray wanting to get back out there so that made the decision a little bit easier.” That said, Murray wasn’t used.

In truth, the conditions were not quite as savagely humid and warm as feared. On a cloudy day in Kobe, the rain fell steadily from early afternoon, meaning the enclosed stadium had not been baked in sunshine. The rule governing the roof staying closed as an old one reapplied, but no doubt the organisers were mindful of this World Cup being held in the Japanese typhoon season. And so World Rugby can be commended for their foresight after all!

With the ball still at its driest, Ireland had two tries in quick time.

First they re-worked a classic from the old Leinster play book. Bundee Aki set up a ruck in the middle on halfway and Jordi Murphy shaped to work a wraparound with Luke McGrath. Instead, he popped the ball back inside to a vacated fringe defence for Kearney - as he did against Clermont in the Heineken Cup semi-finals all the way back in 2011 and against England at Twickenham in 2014 - to steam through, after a little juggling act.

Although he had Garry Ringrose and Andrew Conway on his outside, Kearney has the taste for tries again and he pinned his ears back to take the tackle by Denis Simplikevich. After 26 Tests without a try, that’s three in three games. Like buses indeed.

Ireland struck for their second when Bogdan Fedotko spilled the slippery pill outside the Russian 22. From just one ruck off David Kilcoyne’s strong carry, Sexton had already weighed up his options and with Vasily Artemyev over on the right wing and no-one in the Russian backfield, the outhalf grubbered through for Peter O’Mahony to gather and slide in under the posts. Surprisingly, it was only his second try for Ireland, and first since scoring against Samoa in November 2013.

Unfortunately for the Russian centre Kirill Golosnitskiy, in trying to stop O’Mahony from scoring, he himself slid heavily into the padded upright, injuring his leg in the process. He was taken off on a motorised stretcher after lengthy treatment.

After a trademark multi-phase drive earned an attacking lineout maul a try looked likely until Kilcoyne was penalised for blocking illegally. Even during a break after an Irish defensive set half an hour in, The Fields was echoing around the Kobe Stadium.

Another try briefly went begging when Sexton’s long skip pass to give Conway a run-in was adjudged forward, but it was with an advantage which led to Fedotko being binned for killing the ball.

Ireland opted for a scrum, and although McGrath had to retreat to pick up the quick strike by Kilcoyne, from there Ruddock, Ryan, Kilcoyne and Beirne all put Ireland on the front foot, before Ruddock scored. Ryan deserved half the score when latching onto the Irish flanker, and sure enough he seemed to say “thanks John” on the way back to the halfway line.

However, Ireland failed to make a man advantage tell after Fedotko was binned and they went in 21-0 up.

On the resumption Ireland blew another promising position after good work by Kilcoyne and O’Mahony gave Ringrose a run but Kilcoyne, off a standing start, was stopped on the gain line, the ruck was under-resourced and winger German Davydov pilfered a turnover.

This was compounded by Aki dropping an up-and-under, the Irish scrum being penalised and, after a good defensive maul, they were pinned back again when Artemyev kicked a 60 or 70-metre touchfinder.

Andrey Ostrikov was then binned for catching Ryan high with his arm when clearing out. Yet an error-prone Ireland spent far, far too much of the ensuing period of the game in their own half.

Finally, nearing the hour, and just when it seemed as if the bonus point might become an issue, Ireland scored their fourth try.

With the frontrowers and Iain Henderson having given some energy to their defence, it emanated from the alertness of Larmour and Ringrose. They prevented Simplikevich from tapping back another booming crossfield by outhalf Ramil Gaisin, and secured what was effectively turnover ball.

Jack Carty chipped over the red line for Earls to latch onto the ball and with a neat switched transfer he put Andrew Conway away for his second try of the match.

Finally breaking free of their shackles, Aki carried well off Carty’s short 22 restart, and from the recycle Larmour steamed onto Carty’s pass with a diagonal run from his own 22, beating one man and freeing his hands in another tackle to put Earls away, then taking the return pass to put the deserving Ringose over.

Ringrose was denied another by the TMO for “a clear knock on” that looked anything but clear, but so be it.