The Irish provinces begin their season this weekend, with three in action on Saturday 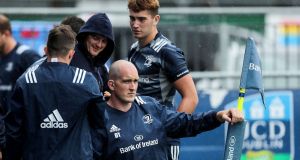 Devin Toner is in the Leinster team on Saturday evening. Photograph: Laszlo Geczo/Inpho

Ross Molony will captain Leinster against Benetton in their Pro14 opener on Saturday, and he’ll be partnered by Devin Toner in the secondrow (Kick-off: 5.15pm Irish time - live on eir Sport).

The frontrow of Peter Dooley, Rónan Kelleher and Michael Bent that started the pre-season friendly win away to Northampton Saints earlier this month is retained. A backrow of Max Deegan, Will Connors and Caelan Doris completes the pack.

Ross Byrne and Jamison Gibson-Park will form Leinster’s halfback pairing. Jimmy O’Brien starts at full-back while the experience of Dave Kearney and Adam Byrne on the wings completes the back three, with Rory O’Loughlin and Joe Tomane combining in the centre.

Elsewhere Billy Holland captains Munster as the lock begins his 13th season as a senior player against the Dragons at Thomond Park (Kick-off: Saturday 3pm).

Hooker Kevin O’Byrne starts the clash on his 50th Munster appearance. Nick McCarthy makes his competitive debut for the province at scrumhalf and partners JJ Hanrahan in the halfbacks. Tyler Bleyendaal and Rory Scannell team up in the centres with Mike Haley at fullback as wingers Darren Sweetnam and Shane Daly complete the back three.

Jeremy Loughman, O’Byrne and Stephen Archer pack down in the frontrow with Fineen Wycherley and Holland in the secondrow. A backrow of Jack O’Donoghue, Tommy O’Donnell and Arno Botha complete the side.

Meanwhile Paddy McAllister is set to make his first competitive start in a Connacht jersey as his side travel to the Scarlets, also on Saturday (Kick-off: 5:15pm).

McAllister, who signed from Gloucester in the summer, made his debut in Connacht’s pre-season friendly win over against Munster at The Sportsground last Saturday.

He joins an experienced frontrow that includes tighthead Finlay Bealham and hooker Tom McCartney. Behind them will be Gavin Thornbury and Quinn Roux, both of whom impressed in Connacht’s three pre-season wins. Captain Jarrad Butler will wear the number eight jersey in a backrow alongside Eoghan Masterson and Colby Fainga’a at blindside and openside respectively.

Conor Fitzgerald is named at outhalf alongside scrum-half Caolin Blade. Elsewhere in the back line, Tom Daly and Kyle Godwin will form the centre partnership with wingers Matt Healy and Stephen Fitzgerald and fullback Tiernan O’Halloran completing the side.