Are they waiting to explode or are Joe Schmidt’s team on the brink of dissolution? 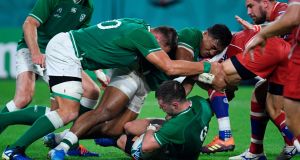 Ireland’s Bundee Aki adds his weight to a ruck as scrumhalf Luke McGrath holds on to the ball against Russia at the Kobe Misaki Stadium. Photograph: Getty Images

On a rainy night in Kobe, Ireland left a steamy arena with a necessary win over modest Russia but without fully rediscovering the collective strength and rigorous efficiency that had propelled them into the role of fancied outsiders ahead of this World Cup. The weeks go on and they remain a mystery in the East.

Are they waiting to explode or are Joe Schmidt’s team on the brink of dissolution? If the night revealed anything, it was an affirmation of the old truth: the influence of Jonathan Sexton on this period of Irish rugby - and sport - is sublime and irreplaceable. In places, Ireland found something of themselves in this sprawling port city but for long patches of the game, they looked lost as well.

It finished 35-0. It probably should have been more because Russia were limited. It was a night when veterans like Keith Earls and a rampaging, workhorse of a performance from Rhys Ruddock rightly won plaudits. But in mindset and intent, Sexton’s influence was left the biggest impression in the evening. Without him, there is a vacuum at the heart of this Ireland team.

What a strange occasion for the St Mary’s veteran. Sexton has done it all in world rugby but here he was, captaining his country for the very first time and as a massive Irish support gave it socks for Ireland’s Call, the number 10 looked as nervous as the lead role on the first night of the school play, parents in the front row.

He was leading a team that had been transformed from a side ranked second in the world to a wounded thing over the space of eighty colour-filled minutes against Japan last Saturday. And his basic task was to point the green team in the right direction.

It took him 20 minutes to do that. Joe Schmidt elected to put him in cold storage at half time with Ireland enjoying a 21-0 lead on the scoreboard. But it felt as if some necessary tension departed the field with Sexton. A sort of aimlessness crept into Ireland’s play as the atmosphere petered out and clock ticked towards the 60 minute mark.

A smashing burst by John Ryan, who fed Garry Ringrose off his shoulder almost brought the fourth try. But after that, the ball spent more time in the air than a shuttlecock and even with Andrey Ostrikov yellow carded, Ireland couldn’t make the inroads.

It needed something special. Again, the touch of improvisation came from the boot of Jack Carty, in as Sexton’s deputy. His measured chip kick bounced perfectly for the magnetic Earls, who transferred to Andrew Conway at precisely the right minute. Nobody was going to catch the Munster flier from there.

The Russians were solid in the first half, even if they never really threatened to unlock Ireland’s defensive line and there was a hint of desperation about Ramil Gaisin’s ambitious drop-goal attempt, which just wilted in the dead heat.

For earlier games, this indoor Kobe arena had been as drenched as the Amazon rain forest because of the heat and humidity. Here, it was positively chilly in comparison. During an afternoon when the rain lashed down on Kobe, nobody was giving out about the closed roof now. True to our nature, the huge Irish support seemed to arrive in Japan with one umbrella between the lot. They landed on the Misaki stadium like drowned rats but with spirits none the damper.

Still, on the field, it became steamy as the night went on. Bundee Aki struggles were conspicuous; the normally deft Connacht centre spilled three balls within the first hour and cut a picture of frustration. After the disappointment of the first game against Scotland, when he left with concussion, it was as if Aki was trying too hard to get his World Cup going. In that way, he was emblematic of the team and the errors mounted up.

Ireland had got the score board rolling early here, maintaining their habit of getting out of the blocks sharp. It began when Jean Kleyn played Rob Kearney through a gap in the Russian cover with a smart inside pass. Kearney, bearing the ripest shiner of any Irish sports man since Barry McGuigan went toe to toe against Stevie Cruz all those decades ago, had a clear eye for the line. He used his strength and experience to hold off the Russian cover to score the 17th try of his career. He’s had more famous scores in bigger theatres but it was a hugely restorative moment. Suddenly, the Irish players looked like they recognised the game- and themselves again.

Peter O’Mahony followed in the 12th minute, cantering through to chase Sexton’s stabbed kick through a Russia defensive line stretched across their 22. The pacing was perfect and Russia’s centre Kirill Golosnitskiy badly damaged his shin after colliding with the post in a vain attempt to prevent the score. Sexton did not pause to ask after his wellbeing after tapping the conversion. He was a picture of cold concentration.

They finished with a couple of pretty tries, with Conway and Gary Ringrose at the end of two crowd-pleasing attacking bursts. It was enough.

But in a tournament when the All-Blacks have been rampaging through tier one and tier two nations and having the time of their lives, Ireland’s fitful bursts of creativity and the strange listlessness at the breakdown, where the technical efficiency and ferocity had the calling card of Joe Schmidt’s time in charge, made the stadium go too quiet for too long.

It leaves the brilliant travelling carnival of Irish supporters progressing towards a quarter final that, right now, has a backdrop featuring black storm clouds and the usual unhappy ending.