Munster experience should prove too much for visiting Dragons 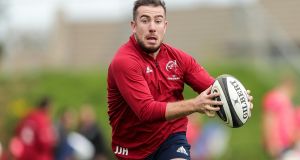 Dragons director of rugby Dean Ryan summed up his side’s challenge in Limerick: “We know there is no hiding place in Munster. Thomond Park is an incredibly hard place to go first up and we will need to play well to get anything.”

Dragons, who finished sixth in Conference B last season to Munster’s second place in Conference A, will start with a debutant Sam Davies at outhalf.

Munster have the more resourceful JJ Hanrahan at 10 teaming up with Leinster exile and scrumhalf Nick McCarthy, who has followed the patch of Joey Carbery and Andrew Conway. Look how that worked out.

Billy Holland brings his mountain of experience as the lock begins his 13th season. Munster have experience around the park, more so than their Welsh visitors. Hanrahan aside, Tyler Bleyendaal and Rory Scannell team up in the centre with Mike Haley at fullback and Ireland winger Darren Sweetnam on the right flank.

At this stage of the season with, the likelihood is of some rust and errors, it remains Munster’s match to lose.