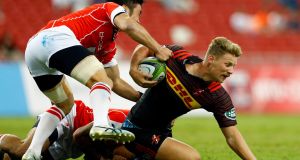 It comes just days after Springbok coach Rassie Erasmus announced new measures to try and entice players to remain in the country, including top-up payments to their provincial contracts for those that remain loyal to their teams.

Du Preez and Van der Merwe, both capped by the Boks in 2018, will arrive at Sale from the Durban-based Sharks franchise at the end of the Super Rugby season.

Amid fears that the number of players wishing to find their fortune abroad will lengthen considerably after the World Cup in Japan, South African Rugby have made a desperate play to keep their talent in-house, but it has not got off to a good start.

“I feel the time is right in my career for a move away from South Africa,” Van der Merwe told the Sale Sharks website.

“I have just started a family and after considering all my options with them, I feel this is the best one to take for us as a family.”

Du Preez returns to Sale after a loan spell at the club earlier in the 2018-19 season.

SA Rugby have braced for a mass exodus of players for more lucrative contracts post-World Cup by scrapping a rule that stated overseas-based players must have played 30 times for the Boks to be considered for selection.

“We have been agonising over how to keep players in the country since the game went professional more than 20 years ago and the bottom line is that the rand is too weak and the economy of South African rugby too small to compete,” Erasmus conceded.

“A South African player can earn more from a two-month contract in Japan than he can if he were to win the World Cup with the Springboks this year. That’s the reality we have to face up to.”

SA Rugby have balanced the scrapping of the 30-game rule by telling overseas clubs they will strictly enforce World Rugby’s regulation nine that guarantees players are available for national teams 14 weeks of the year.

The Boks have in the past compromised with clubs to allow them to retain players during the Rugby Championship and November internationals.

“If the clubs don’t like that then they have the option of not signing the player,” Erasmus added.

The player drain in South Africa is not restricted to rugby, with a number of cricketers turning their back on the national team to take up contracts in England.

Current test fast bowler Duanne Olivier is the latest after he joined Yorkshire on Tuesday.