‘Worried’ Schmidt wants Ireland to take a step back and breathe 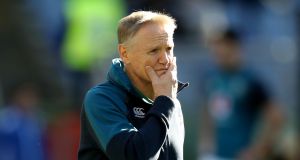 Ireland head coach Joe Schmidt: ‘We feel that we can put a really good performance together and it’s got to be in two weeks’ time.’ Photograph: David Rogers/Getty Images

Joe Schmidt is a worrier by nature, but he is palpably “worried” by Ireland’s performances to date in this year’s Six Nations. In particular, the Irish head coach is concerned by his team’s lack of confidence, with the net effect that they are trying too hard.

The next two weeks, he believes, will in some respects be a time to take a step back rather than forward.

“I think sometimes when players haven’t played for a long time and they don’t quite get it perfect when they come back in, I think they can get a little bit frustrated and try too hard, and when they try too hard it doesn’t go well for them and then they start to lose a bit of confidence,” he said in the aftermath of Ireland’s scrappy 26-16 win over Italy in Rome on Sunday, no doubt with the likes of Conor Murray, Johnny Sexton and others in mind.

“And I think sometimes it’s just about taking a step back,” he added. “We always talk about going forward. Sometimes you’ve got to take a step back and take a deep breath and not panic because I think the players were a bit broken by the fallout from the England game and then suddenly they start to question themselves.‘

“I think the coaching staff, it’s our job to re-energise the group and reignite the confidence. As soon as you lose that confidence, there’s a couple of times where I felt we could have taken a risk and we didn’t take the risk because we’re feeling a little bit suffocated. And you can’t play within yourself, not if you want to beat a good team, and the good teams are tough to beat.

“I would caution against underestimating Italy. They’re difficult to cope with, they get good lineout pressure, they get good pressure at the ruck, they look to hold players up and turn them over with the use of the maul or the choke tackle and their scrum held out really well as well.

“Given that we had made quite a few changes in the pack, we knew that was a risk but we want to take some risks, we want the players to feel a bit of pressure because we know that potentially can happen at any stage.”

“I think you can sugarcoat things sometimes because of where you end up, not because of what you did in the process. We beat France with a late drop goal, in injury-time. I felt we were superb in the first half against England [last year], but that’s probably the benchmark and that’s what we’ve got to keep working our way back towards.

“But as you saw with England, it doesn’t take too many changes and I think England aren’t quite the same team if they’re missing a few players that they are missing, as much as they’ve got a strength in depth of other guys coming in.

“So it is fickle. We feel that we can put a really good performance together and it’s got to be in two weeks’ time, and then we’ve got a six-day turnaround to Wales. We start the World Cup with Scotland and then a six-day turnaround to Japan so I think, for us, that’s a perfect opportunity to get as close as we possibly can in a competition to where we’ll need to be, come Rugby World Cup. ”

More changes are likely for the game against a rejuvenated France.

“We will just keep balancing it and keep trying to have a look at combinations. We don’t get a lot of time with the players so we want to maximise this time to give a bit of opportunity to players and learn a bit about them. It was good to give a bit of an opportunity to a few players. We will keep cataloguing that and that will help us build towards some decisions down the line.”

To that end, a half dozen or more players could come back into the mix for the final two rounds, with Schmidt and his coaches also mindful of the six-day turnaround before facing Wales on the final Saturday, when Warren Gatland’s team will be seeking a Grand Slam if they win at Murrayfield in their penultimate game.

“There are a few guys, potentially Joey [Carbery], CJ [Stander], Garry [Ringrose], Robbie Henshaw could probably have played today, plus the non-injured guys, Cian [Healy], James [Ryan], Rory [Best]. You are starting to put a few good players there. The ones who are not 100 per cent ready for France may come in for the Welsh week. A lot of that is dependent on how they are.”

Tadhg Beirne also made an impressive return for Munster in their win over the Ospreys on Friday night. “He did really well,” said Schmidt, “and Tadhg is the sort of guy who, because of his volume of minutes, it is not the worst thing for him to have a bit of a break. But for him to hit the ground running was super.

“I briefly exchanged texts with Johan van Graan this [Sunday] morning and we discussed Tadhg briefly. There are a few other guys who went back last week as well and did really well. That is what we are looking for. Those who stayed in camp, they have to be really good as well.”

The amount of green in that stadium, there was a real fear of letting those people down

To the Irish fans who have booked trips to Japan for the World Cup, or are considering doing so, Schmidt had the following message:

“Look, I would just say I am as worried as they are. I do not have any crystal ball, other than to say I know how hard this group work, and to say we have had fantastic support, and the group massively appreciate it.

1 David Clifford sends everyone back to their corners unbeaten
2 Six Nations: A 21st-century tournament that saw Irish rugby come of age
3 Sublime 67 leaves Rory McIlroy right in the mix at Torrey Pines
4 Mike Catt hopes to have Irish backs purring in Six Nations
5 Six Nations: Ireland are contenders but England still the team to beat
Real news has value SUBSCRIBE