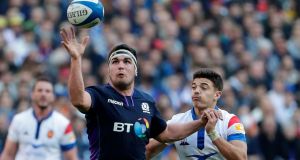 Stuart McInally admits Scotland failed to live up to their great expectations as they delivered their latest letdown in Paris.

Scotland believed they could claim a first away victory over France since 1999 despite touching down in the French capital minus a string of key figures. But they handed France the early initiative in both halves, and paid the price as the slumped to a 27-10 loss.

Defeat to Ireland a fortnight ago means it is two Six Nations losses in a row for Gregor Townsend’s men, and the task is not going to get any easier as they close out their Championship campaign at home to Grand Slam-chasing Wales before travelling to London to face England.

The win over Italy back on the opening weekend would be scant reward from a competition in which McInally claims Scotland genuinely believed they could compete for prizes.

“It’s so frustrating,” said the Edinburgh hooker. “The last couple of years doing so well, the summer tour and the autumn some good performances.

“We came into this tournament with a higher level of expectation than we’ve had before, and that is what makes days like this so disappointing. You put all your effort into coming here to win, you really believe you can win, and you just don’t perform. It’s just so disappointing. “It’s not just one thing. It’s a whole host of things, and a lot of areas we were second best in. So frustrating.”

Townsend will hope Finn Russell will have recovered from the head knock which caused him to miss Saturday’s Stade de France showdown by the time Wales pitch up at Murrayfield, while prop WP Nel may also boost Scotland’s setpiece by making his return.

But even with that key pair potentially back in the line-up, Scotland will remain the underdogs against Warren Gatland’s men.

Now McInally has confessed his fears that despite his own side’s progress, they still have not bridged the gap between them and their rivals.

Asked how close he felt Scotland were to grabbing a big win away from home, he said: “I don’t know if I’m honest. I would love to say that I know for a fact we’re really close.

“I do believe we were in a great place. We played some really good rugby in the last 12 to 24 months that shows we can take on anyone in the world, but we need to start coming into these tournaments and getting wins in France and going down to Twickenham, and really making sure we are competing down there. That’s how we’re going to move forward as a team.”

As well as Russell and Nel, Scotland were also missing the combined talents of Stuart Hogg, Huw Jones, Ryan Wilson and Sam Skinner, but McInally refused to blame their injury woes for France claiming a bonus point with tries from Romain Ntamack and Yoahn Huget, before Gregory Alldritt’s late double.

He said: “We’re really disappointed with Saturday. We put a lot into the week of training, and we really wanted to come here and win, and do something that Scotland haven’t done in a long time.

“We gave France too much ball. We weren’t as accurate as we needed to be against a team like that.

“We’ve had a whole bunch of players out, but so have other teams as well. We’re not going to use that as an excuse. We weren’t good enough today. We’ve got two exciting games to finish, Wales at home and England away. All our focus goes onto that.”