Leinster Rugby to open centre of excellence at Donnybrook

Building, which cost €1.3m, will be first of five planned centres throughout the province 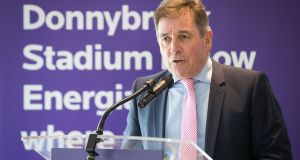 Mick Dawson: “The schools system is fantastic but also there are an awful lot of other kids outside the traditional rugby playing schools who are playing rugby.” Photograph: Oisin Keniry/Inpho

Leinster Rugby are set to open the first of what it hopes will be five centres of excellence throughout the province in Donnybrook next month.

The 6,000 square foot building is at the Old Wesley end of the ground incorporating the old Leinster Branch offices and the will house a gymnasium, meeting rooms, changing rooms and offices. It was built at a cost of €1.3 million.

Mick Dawson, CEO of Leinster Rugby, explained the thought process behind the Donnybrook facility and those that will be created in other educational hubs around the province.

“The schools system is fantastic but also there are an awful lot of other kids outside the traditional rugby playing schools who are playing rugby.

“For them to thrive and develop a lot of the time their parents have to drive them to Dublin for extra sessions. The likes of Sean O’Brien and Tadhg Furlong, whose parents were fantastically supportive, we would like to have a centre closer to where they live. We are looking at working with IT Carlow, King’s Hospital and IT Dundalk, where we would partner those people.

“Donnybrook will cost about €1.3 million. We have been helped by philanthropy, a number of people have contributed towards that cost. It will be known as the Ken Wall Centre of Excellence.”

In terms of funding the overall project, Leinster will look to apportion a percentage of any surplus arising from a Celebration Dinner to commemorate the 10 year anniversary of the province’s Heineken Cup victory in 2009. A donation will also be made to Our Lady’s Children’s Hospital, Crumlin, at the behest of the players who were involved in the Michael Cheika-coached European winning team.

Dawson said: “There are no raffles, no auctions. We have never gone near the Leinster corporate market. This is not an attempt to raise money. If there is any surplus it will go to the Children’s Hospital and the development of the Leinster centres of excellence.”

The then head coach Cheika, Rocky Elsom and the remainder of the 2009 squad will be in attendance, including three members of Leinster’s current coaching cadre, Leo Cullen, Felipe Contepomi and John Fogarty.

Leinster are also in the process of fine-tuning their application to redevelop the Anglesea Stand at the RDS under the Government’s large capital infrastructure fund for large scale sports development. The project is estimated to cost €30 million and the paperwork has to be submitted by April 17th.

It is a joint venture from Leinster rugby and the Royal Dublin Society who together will raise 50 per cent of the required finance while seeking Government funding for the balance. The project already has a naming rights partner. It would increase the capacity of the stadium to 21,000 from its current 18,500. There is full planning permission for the venture.

“We would see it as a game-changer from a Leinster point of view. We are a multifaceted organisation in that we run a professional organisation but also run the game. An awful lot of the money that is generated through the professional team goes back into developing the game.

If they receive the requisite finance then the project might start in the summer of 2020, although that is considered a tight timeline given the tender process and a need to upscale the drawings.