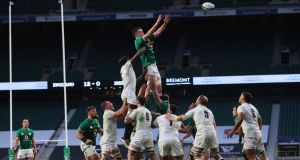 It may not look like much in the aftermath of last Saturday’s defeat by England but, beginning with Georgia at the Aviva Stadium this Sunday (kick-off 2pm), two more games in this autumnal window affords Ireland the chance to put to right some of the issues that need addressing.

This begins with more accuracy at the lineout and at the breakdown according to stand-in Irish captain James Ryan.

“It’s something we’re putting an emphasis on, especially around the ruck - an area that’s been traditionally a very strong aspect of our game.”

While strong against Wales he conceded: “It probably wasn’t where it needed to be against England. So when we looked at that one thing is being urgent, getting there early and seeing threats. Another thing is dropping our height in the carry at times, especially when we get close to their line. It makes the barrels’ job much easier,” he said in reference to the first two players to arrive for the clear-out.

There’s no doubting the culture being harnessed by Andy Farrell, as evidenced by the team’s effort and togetherness in difficult circumstances, but invariably when the little details at ruck or lineout time go awry, it is compared to the exacting environment under Joe Schmidt.

But with regard to Ireland’s set-piece Ryan maintained: “I don’t think things have slipped. It’s kind of a combination of things - whether we need to simplify the (lineout) menu at times or whether we need a bit more variety - but certainly in terms of the detail - that was spot on all week and it’s not something that we would say is wrong.

“But I thought that game gave us an understanding of where we’re at in terms of our ruck and our set-piece.”

Yet as in the defeat by France, executing lineouts and mauls was a little off, witness Ryan absolving Ronan Kelleher of the blame for the ‘overthrow’ which led to Jonny May’s breakaway try.

“He’s going to be a big player for us and that’s just a snapshot. It might look like an overthrow to everybody else but unless you’re in here you’ll know that that throw is actually perfect and that we’ve got the movement slightly wrong. It’s about two feet further up the line than it should be.

“That’s just an example of it being a unit skill, a collective thing. as opposed to any one person because he (Kelleher) is another guy I thought played really well and really fronted up and it’s definitely certainly not on him. It’s on all of us to get the lineout right and to get the set-piece right.”

Trailing 12-0, Ireland then went to the corner only for Maro Itoje to pick off Kelleher’s throw, but Ryan has no major regrets over that decision.

“I spoke to Ross (Byrne) before the game and said, ‘look, if you want to take the points, have a go when we get a penalty, let me know’. I looked at him and he said ‘let’s go for the corner’. If that’s how he feels then we’ve got to have enough belief in and confidence in us as a pack to have a crack. It’s not something I massively regret. If we feel that’s the option then we go with it.”

For all the planning in creating different lineout options when Ireland go to the corner, ultimately the decision to do so or kick at goal is primarily made in the moment.

“I think that you have a few what-if scenarios in your head but a lot of that is just feeling how the game’s going.”

Ryan was “not that keen” on discussing his own performance, preferring to focus on the collective, but felt “I thought I went alright” if ruing a couple of what he called silly penalties.

“It’s just about playing on the edge but not playing over it and just being calm in those moments so you’re not giving away stupid penalties. That was one aspect that I was disappointed with.”

In any case, for his second game as captain before happily welcoming back Johnny Sexton, righting some of the aforementioned flaws they’ve been working on, “would constitute a good result for us. There’s probably a few guys who are going to get an opportunity as well.

“We’re actually really looking forward to it. We trained today with loads of energy, loads of positivity. We’ve two more weeks now to finish on a real high note before we go off to our own provinces so we’re just enjoying the time with each other. We enjoy playing for Ireland and it’s another opportunity for us this week to put in a result that we can be really happy with.”