'As a head coach you've to deal with everything, and this is unprecedented' 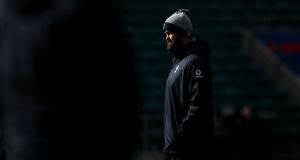 Andy Farrell: ‘From day one, every single time we come into camp, the first thing that the doctor stands up and says is ‘hygiene’ ”. Photograph: Dan Sheridan/Inpho

Deflation but aware of the ever changing situation summed up Ireland’s mood on Monday at their base in Sports Campus Ireland.

The team trained in the morning, only to be told that their match against France in Paris at the weekend was postponed due to coronavirus. The IRFU are still awaiting confirmation for the women’s and under-20’s fixtures, which take place in Lille and Perpignan respectively.

The France v Ireland game was pulled following instructions received from the authorities in France.

The Wales matches against Scotland at senior and U-20 level will be going ahead as scheduled. However, the women's fixture between Wales and Scotland has been postponed after a Scottish player tested positive for coronavirus, also known as Covid-19, and a further seven members of the Scotland camp (players and management) are self-isolating.

“We would love a chance to play for a title that is still in our own hands,” said Ireland head coach Andy Farrell. “Yeah. It is what it is,” he added about the feeling of disappointment that his first season in charge should end somewhat chaotically. But stoicism ruled the day.

“As a head coach you have to deal with everything that goes your way and this is unprecedented, really. But it’s part of the job. You’ve got to expect the unexpected and just get on with it.”

The players will remain with the squad until Tuesday before going back to their respective provinces. Leinster, who are scheduled to fly to South Africa at the weekend for a two-week stint, may now have to hastily revise their ticket arrangements.

Farrell, having been informed that the game was off just minutes before talking to the media, had little idea of how the two matches against Italy and France could be accommodated by the autumn schedule.

Ireland also have a summer tour to Australia with two Test matches against the Wallabies so a rethink of just what shape the tour should take and what players should be involved given the heavier international burden next season is another problem for the coach to solve.

“It’s all in the pot, yeah, it’s a good point,” he said. “But we don’t know when those [Six Nations] games are going to be yet. Whether it is 100 per cent possible yet I don’t know. More things could change this weekend.

“That would be five games over the autumn. I don’t know whether that’s going to happen. Four is difficult enough, four on the bounce is difficult enough. Teams always try to schedule their November for a Tier Two or whatever which gives a developmental flavour to the November calendar.

“We presume that certainly one game will be played around that period but we haven’t had anything confirmed.”

The Six Nations said in a statement that no immediate announcement will be made on rescheduling before they discuss the issue with all relevant stakeholders and assess the evolution of the situation.

It is not the first time matches have been postponed. In 1972 Scotland and Wales did not travel to Dublin to play Ireland because of the escalating political situation in Northern Ireland. The championship was not completed.

In 2001 the tournament was affected by an outbreak in Britain of the infectious livestock Foot and Mouth disease. Restrictions on travel were imposed and Ireland’s three fixtures against the home nations were postponed until September and October with Ireland denying England a Grand Slam in the October fixture.

But Farrell will have no objection if Ireland are asked to play five Test matches next autumn.

“No, I’d look at it, I’d certainly look at it,” he says. “But you’ve got to look at the whole picture of the November calendar from our perspective. We’ve got three really tough games coming up. We’ve got two against Australia [in the summer] and then South Africa, Australia and Japan.

“It’s a tough old five games and then you’re throwing in what is effectively, hopefully, a semi-final and a final, regarding the Six Nations. It changes the goalposts a little bit so it does take some reflection.”

He added that the Irish team followed the same simple protocols as always when in camp but did not drastically change behaviour patterns because of the virus.

“Well, we’ve sent out numerous emails and in fact we’ve got a talk scheduled for tomorrow as regards to the coronavirus,” said the Irish coach. “We tend to be pretty good in rugby, in house. We’ve had problems for many, many a year in a team environment where you pass on viruses, flus etc . . . It’s no different for us.

“From day one, every single time we come into camp, the first thing that the doctor stands up and says is ‘hygiene’, and there no difference between the coronavirus and the protocols that we have adhered to for the last few years.”