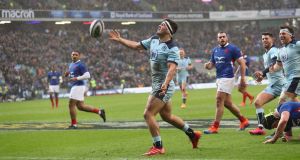 France’s hopes of their first Grand Slam in a decade were ended by their own undiscipline and by a Scotland side whose strong defence – their forte previously in this Six Nations – was matched by their adventure in attack.

The visitors were at their full complement for less than half an hour, as an early yellow card for François Cros was followed by red for Mohamed Haouas. Romain Ntamack’s game ended in the first half, too, after he took a head knock and while Antoine Dupont was the most creative player on either side, he could not do enough to revive the prospects of a team whose self-belief steadily deserted them over the course of the game.

Sean Maitland scored two tries, one either side of half-time, as Scotland held their nerve after going a man up. Replacement Stuart McInally added a third and the boot of Adam Hastings provided the rest of the points.

The result means France stay level on points at the top of the table with England and throws the outcome of the Championship wide open with one round of games to play.

France had to make a late change to their bench, bringing the Toulouse hooker, Peato Mauvaka, in for Camille Chat, who was injured during the warm-up. That may not have had disrupted them, but those two others early on did: the loss of Cros to the sin-bin for a dangerous tackle on Grant Gilchrist and the departure of Ntamack after failing an HIA.

Worse followed close to half-time, when Haouas was sent off for punching Jamie Ritchie.

Ntamack had missed the first scoring chance with a long-range penalty attempt, but otherwise had no time to get into his stride before he sustained a head knock when following up his own spill with a tackle on Sam Johnson.

For his part, Cros was unfortunate to be singled out for his tackle on Gilchrist, as it was Paul Willemse who came in second and appeared to tip up the lock.

A man down at the first scrum, France were penalised for not driving straight and Hastings opened the scoring with a simple effort from 25 metres. He added another, longer effort near the midway point in the half, further discomfiting France, who continued to look only sporadically dangerous.

That changed, however, in the closing 10 minutes of the half. A break down the left flank by Gaël Fickou was halted by the defence, but only at the expense of throwing too many men into the breakdown. When the ball came back, a moment of inspiration from Dupont created the first try, as the scrum-half’s perfectly weighed punt was collected and touched down in the right corner by Damian Penaud. Mathieu Jalibert, Ntamack’s replacement, converted from the touchline to give his team the lead.

Scotland tried to counter immediately, but their momentum was halted when a brawl involving several players from both sides broke out close to the French posts. Haouas’s offence was the most blatant – at least after several reviews of the incident – and he was sent off for a right hook on Ritchie

Another penalty in front of the posts produced another three points for Hastings and in the last play of the half Maitland added a try. Gilchrist made the initial opening as the defence was stretched to breaking point, Stuart Hogg took the attack on, then Johnson put Maitland in at the right corner. Hastings missed the conversion, but a 14-7 half-time lead against 14 men was an excellent position for the home team to be in.

That became 21-7 five minutes into the second half, with Maitland again touching down and Hastings converting. Hogg was the instigator this time, breaking from midfield after Hamish Watson had turned over a French attack and some slick passing involving Chris Harris and Ali Price ended up with Johnson again giving the winger the space he needed to score.

France’s frustration was increasingly evident and while they had little option but to try to speed up the game, they undid their own efforts by attempting to force openings too soon. Anthony Boutier came close to a breakthrough with nearly an hour on the clock, but after being halted in the tackle less than 10 metres from the line he was unable to offload to a teammate.

The arrival of the rain made handling trickier and another France attack was stopped just short, but a Jalibert penalty took them into double figures and revived their hopes of a late recovery.

Well, revived them for a couple of minutes, until McInally, just off the bench, scored from a lineout. McInally threw in poorly, but the ball bounced off a France lock, allowing the hooker to collect and race clear from 20 metres out. Hastings converted and at 28-10 down France realised the game was up.

Their captain, Charles Ollivon, got a score back five minutes from time, with Jalibert converting. Another try would have produced a losing bonus point and given France the edge going into Saturday’s final round of fixtures, but they did not have time to mount another attack. - Guardian

2 After waiting 10 months, England cricket fan hoping for glimpse of his heroes