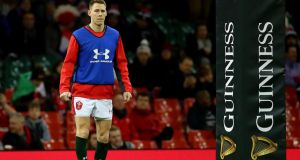 Liam Williams will rejoin the Scarlets from Saracens before the end of the season. Photograph: James Crombie/Inpho

The Scarlets announced that they, Williams and Saracens have reached a mutual agreement that will allow him to be available for the Llanelli-based team for the remainder of this season.

Williams, who is currently recovering from an ankle injury that has sidelined him since October, had been set to move this summer following three seasons in the English Premiership.

The Scarlets announced in December that wing or fullback Williams would be moving back to them.

Saracens, meanwhile, will be relegated from the Premiership at the end of this season following persistent salary-cap breaches.

Williams, who has won 62 caps and toured New Zealand with the 2017 British and Irish Lions, said: “I’m really excited about returning to the Scarlets, and would like to thank everyone involved for their support in making it happen.

“I’ve had a fantastic few years at Saracens and will take some very happy memories away with me. I’ve been working hard on my recovery and can’t wait to get back on the pitch.”

Meanwhile Bath have signed Williams’ international teammate and Wales scrum-half Rhys Webb for the rest of this season.

The Premiership club said the 31-year-old will be joining them with immediate effect.

Webb, who will rejoin the Ospreys next term, could feature in next Sunday’s Premiership west country derby against Bristol.

French club Toulon had agreed to release Webb from the final year of his contract with them so he could link up again with the Ospreys.

Toulon then announced his immediate departure last month, but Webb’s only appearance of late was as a replacement during Wales’ opening Guinness Six Nations game against Italy on February 1st

Although he falls short of the minimum 60-cap requirement for players plying their trade outside of Wales to be available for Test rugby, the Welsh game’s Professional Rugby Board granted him a six-month dispensation, which made him available for this season’s Six Nations.

Webb has won 32 caps and toured with the 2017 British and Irish Lions to New Zealand.